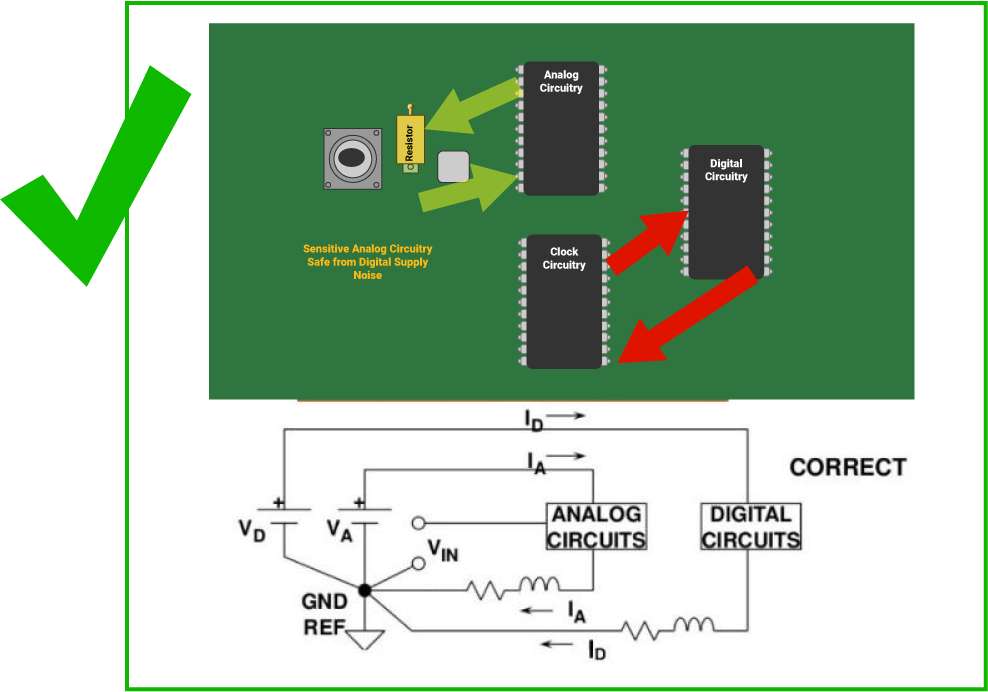 From a PCB assembly point of view, proper placement of components reduces the cost of production and reduces project production lead times while maximizing the operational efficiency of the PCB assembly. This makes PCB design considerations for component placement a critical part of the design process.

The first step in PCB layout design is to have a floorplan. A floorplan is a rough sketch that allocates general areas where blocks of circuitry and connectors are to be placed on the board.

What is a PCB schematic?

A PCB schematic is a fundamental two-dimensional circuit representation showing the functionality and connectivity between different active and passive components.

How can I improve my PCB design? With PCB floorplans!

The floorplan links the schematic drawing and the layout. It provides a head start to the designer on component placement. A pre-placement floorplan will allow the designer to optimize the component placement for signal integrity goals. Also, the small components, like bypass capacitors and termination resistors will be placed at an early stage instead of getting squeezed into the design at the end. The functional blocks of circuitry like power conditioning, RF, digital, analog, etc., should be arranged as groups to reduce signal crossing.

A floorplan gives an insight into how the signals flow between functional blocks. For an efficient board, group the power conditioning together so that their signals do not have to cross through sensitive areas of RF circuitry. Plan your placement to maintain the connection lengths as short as possible. The components that are part of high-speed signal paths where multiple nets connect a series of components should be placed as close together as possible. The designer has to consider the routing channels while planning the component placement to ensure there is adequate space. Check out our tutorial on how to place components in KiCad.

The requirements of power and ground planes should also be considered when planning out the placement of functional blocks of circuitry. Always implement continuous power planes unless there is a scenario where the design demands a split power plane. When dealing with split power planes, be cautious while placing the connected components across the split. The high-speed transmission lines should not cross the splits in power planes since it will break up the return path for those signals. Finally, avoid placing components of a different functional group in the midst of another circuit. For example, separate analog circuits from digital circuits. The figure below shows an example of a PCB floorplan:

If your layout has repetitive design blocks, auto-group the components to speed up the routing process.

The placement routing topologies should be implemented in a way where the analog and digital GND do not mix up. The block diagram below shows the component placement. As we can observe in the first placement scheme, the analog and digital currents overlap each other. This degrades the analog signals due to crosstalk. The PCB designer must avoid such practices. In the second scheme, we can see the GND paths for analog and digital are isolated. Here, the digital return current does not interfere with the analog reference GND. The designer should adopt a placement strategy such that even if the GND is not isolated (same net), the currents of either section do not interfere with each other. To deal with crosstalks in HDI boards read how to avoid crosstalk in HDI substrates.

As a first step, the designer should read the schematic and breakdown into sub-sections depending on the circuit function. For instance: analog, digital, high-speed, high-current, power supply, etc.

Apart from the circuit function, the voltage and current levels should be analyzed. Circuits with similar VCC and GND should be grouped and placed together.

Some of the component placement considerations are discussed below.

First place the critical components which have fixed locations like connectors

The component placement aspect of PCB design depends on the product housing, floor plan by the client, and the density & type of components used.

While starting placement a particular order should be followed:

Some of the important factors that should be considered while carrying out component placement are listed below:

Apart from the circuit function, voltage & current levels should be considered. Circuits with similar VCC and GND should be grouped and placed together as shown in figure no (4). The different functioning sections are prioritized and placed. The most critical are in order of priority

Place the main components as per signal flow.

Place the associated components near the main components

A termination resistor is placed on the end of the circuit nearest to the receiver while the other side is attached to the power or ground plane. Higher trace lengths from the load pin to the resistor will mean that the circuit will be more susceptible to signal reflection. Hence, the designer should place the resistor as close as possible to the load pin of the receiver to minimize the stub length of the connecting trace.

The series resistor is attached inline after the driver pin of the circuit within lumped distance. Since the resistor is an inline part, it doesn’t have the stub length to be considered like in a parallel termination resistor. After figuring out the right strategy for placing the termination resistors, the designer can include it in the floorplan.

It’s advisable to place all the surface mount devices (SMD) on the same side of the board. All through-hole components should be placed on the top side of the PCB to reduce the assembly steps.

In a high-speed circuit, any metal on the PCB should be considered as part of that circuit. The trace lengths, the via size, and the via depth should be taken into account for high-speed circuit calculation. The designer should understand that the via drill size impacts the size of the via. The smaller the vias, the better will be the performance of the circuit. Once the designer decides the vias sizes, the right placement of these vias close to their respective pads should be considered.

In high-speed design, the vias are placed closed to the pad to avoid parasitic capacitance. Sometimes they are placed partially on the pad or entirely within the pad. These adjustments require DRC adjustments.

To learn about pad design, read What is a Pad in PCB Design and Development?

It is good practice to minimize the use of sockets since they can introduce inductance. The designer should select the correct package, and accompanying component footprint while designing for high-speed. Components like op-amps are available in different packages. One type of op-amp may support shorter trace lengths in a circuit than the other. Finally, the component footprint shapes should be optimized for thermal considerations. The best way to dissipate heat is to place power pads right under the IC footprints that are connected to an internal plane. Even the smallest change in the pad shapes can tighten up the routing and decrease the connection lengths. This will result in a compact design.

Isolate the ground planes when required in the digital section. The figure presented below shows the necessity of isolation within the digital sections. The USB and RJ45 connectors communicate externally. The board GND needs to be isolated to avoid any noise or interference from external chassis/body GND.

Component placement from an assembly point of view

Part size: PCB components will vary in size. The manufacturer will have to consider the sizes of the components to decide the speed of the process accordingly. For every different part size, the pick and place tool will have to change.

Feeder capacity: The number of tape feeders that can be loaded into the machine at a time will directly affect the speed of the process. The size of the feeders will vary depending on the size of the component.

Align similar components in the same direction. This helps in effective routing in PCB design and ensures an error-free soldering process during assembly.

It is essential for manufacturers to oversee proper component placement in order to reduce downtime and turnaround time while streamlining the PCB assembly process. Component placement affects the performance of the device in terms of signal integrity and EMI and is taken care of during the PCB design. Similarly, the mechanical orientation of the component selection affects the assembly time and cost and therefore needs to be considered carefully. Executing the correct testing method proves to be beneficial in determining any wrong placement or faulty components.

To understand the fundamental things such as component selection, schematic checks, etc., required to produce a robust design read, mastering the art of PCB design basics.