What is a PCB Transmission Line?

A PCB transmission line is a type of interconnection used for moving signals from their transmitters to their receivers on a printed circuit board. A PCB transmission line is composed of two conductors: a signal trace and a return path which is usually a ground plane. The volume between the two conductors is made up of the PCB dielectric material. 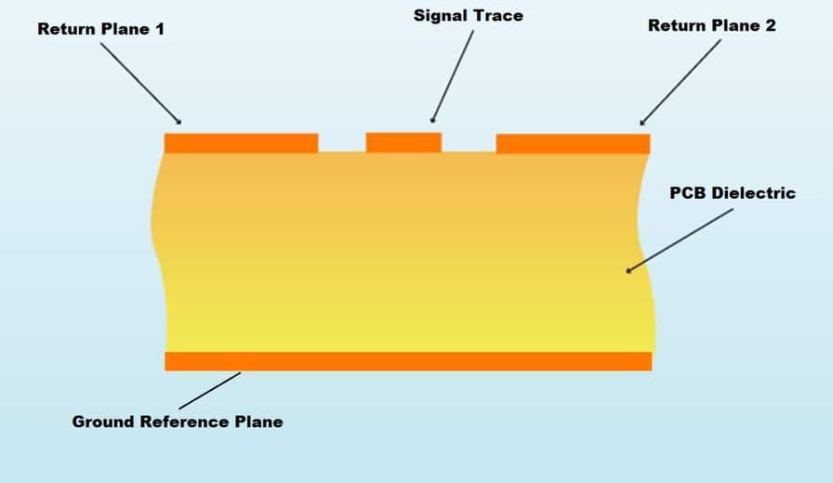 A PCB transmission line is a type of interconnection used for moving signals from the transmitters to the receivers on a circuit board. It is composed of two conductors: a signal trace and a return path which is usually a ground plane. The volume between the two conductors is made up of the dielectric material.

It is crucial to pay attention to the transmission line effects in order to avoid signal reflections, crosstalk, electromagnetic noise, and other issues which could severely impact the signal quality and cause errors.

What are the types of transmission lines?

There are usually two basic types of signal transmission lines in PCBs: microstrips and striplines. There is a third type – coplanar without a reference plane but it is not widely used.

A microstrip transmission line is composed of a single uniform trace located on the outer layer of a board and parallel to a conducting ground plane. This plane provides the return path for the signal. The trace and the ground plane are separated by a certain height of PCB dielectric as shown in the image below.

A stripline is composed of a uniform trace located on the inner layer of a circuit board. The trace is separated on each side by a parallel dielectric layer and then a conducting plane. So it has two return paths – reference plane 1 and reference plane 2.

In addition to conventional microstrips and striplines described above, a coplanar waveguide structure has the signal trace and the return path conductor on the same layer of the board. The signal trace is at the center surrounded by two adjacent outer ground planes. This structure is called “coplanar” because these three flat structures are on the same plane. The dielectric is located underneath. Both microstrips and striplines may have a coplanar structure. Below is a coplane microstrip waveguide with a ground plane:

A coaxial line has a circular shape and is not a circuit board transmission line. This circular cable is composed of a central wire conductor and an outer conductor for the return path. The space between the two conductors is filled with a dielectric material. The outer conductor wire completely surrounds the signal wire. Coaxial lines are mostly used as cables for high-frequency applications, such as television, etc. These cables must have a uniform geometry of conductors and the properties of the dielectric material must be uniform throughout the cable length.

It is essential to keep in mind that a PCB transmission line is composed of not only the signal trace but also the return path, which is usually an adjoining ground plane or a coplanar conductor, or a combination of both.

When is an interconnection considered a transmission line?

The set of electrical conductors used for transmitting a signal between source and destination is called a transmission line. If it is not possible to ignore the time it takes for the signal to travel from the source to the destination, as compared to the time period of one-fourth of the wavelength of the higher frequency component in the signal.

Two very important properties of a transmission line are its characteristic impedance and its propagation delay per unit length. If the impedance is not controlled along its entire length, or the line is not terminated by the right value of impedance, signal reflections, crosstalk, electromagnetic noise, etc. will occur. This degrades the signal quality and affects the signal integrity of the circuit board.

When the signal frequencies (in case of analog signals) or the data transfer rates (in case of digital signals) are low (less than 50 MHz or 20 Mbps), the time taken by a signal to travel from its source to its destination would be very small (< 10%) compared to the time period of one-fourth of a wavelength or the fastest rise time of a digital pulse signal. In this case, it is possible to approximate the interconnect by assuming that the signal at the destination follows the signal at its source at the same time. In such a low-speed scenario, the PCB signal can be analyzed by conventional network analysis techniques and we can ignore any signal propagation time or transmission line reflections, etc.

However, when dealing with signals at higher frequencies or higher data transfer rates, the signal propagation time between the source and the destination cannot be ignored in comparison to the time period of one-fourth of a wavelength or the fastest pulse rise time. Therefore, it is not possible to analyze the behavior of such high-speed signals using ordinary network analysis techniques. The interconnects need to be considered as transmission lines and analyzed accordingly.

How to predict the signal behavior on microstrip and stripline?

At high frequencies, transmission lines need to have a controlled impedance to predict the behavior of the signals and avoid signal integrity issues.

This is the reason why you need to know at which speed signals propagate on transmission lines and the time they take to do so. We will give you a few equations to calculate the signal speed and the propagation delay for both stripline and microstrip structures.

What is signal speed?

Let’s first discuss the speeds at which signals propagate on a PCB interconnect.

Electromagnetic signals travel in vacuum or air at the same speed as of light, which is:

A signal travels on a transmission line at a slower speed, affected by the dielectric constant (Er) of the dielectric material. The relations for calculating the signal speed on a PCB are given below:

Henceforth, we can use Vp to denote the speed of signals on a PCB.

What is propagation delay?

The propagation delay is the time taken by a signal to propagate over a unit length of the transmission line:

Where:
V is the signal speed in the transmission line

On transmission lines, the propagation delay is given by:

What materials are used in PCB transmission lines?

The signal speeds and propagation delays for a few board materials are given in the table below:

What are the transmission line effects?

As mentioned above, for high-speed or high-frequency signals, we need to consider the transmission line effects. We can use a few thumb rules:

In the case of high-frequency analog signals, let the maximum frequency content in the signal

How to define the critical length?

For analog signals, the critical length lc is defined as one-fourth of the wavelength of the highest signal frequency contained in the signal.

In the case of digital signals, the fastest rise/fall time of a signal pulse is the most important parameter. It defines the transition time from one logic level to another logic level. Basically, the transition time of the data bit. For digital signals, the critical length lc is defined as the line length over which the signal propagation time is half of the fastest rise/fall time of the signal pulses.

This definition implies that the signal should be able to travel from the source over a length lc of the line. This signal should return over the same length back to the source point in a total time equal to the rise/fall time tr.

Equations 2a and 2b are related if we consider the highest frequency content in a digital signal rise/fall time.

The highest frequency content in a digital signal of rise/fall time tr is given by (as per Fourier Analysis):

Which is the same as equation 2a.

What is a shortline?

If the line length

there is a shortline and it is not necessary to consider its transmission line effects, nor to design it as a controlled impedance line.

But if the line length

it then becomes necessary to consider the transmission line effects and to design such lines as controlled impedance lines.

If the fastest signal rise/fall time is: tr = 1ns, then, assuming the FR4 material with a dielectric constant Er = 4,

and the critical length

Therefore, signal traces longer than 3/1.5 = 2 inches need to be designed as controlled impedance lines. Note here that tr of 1ns corresponds to a maximal signal frequency:

How to estimate the rise/fall time from data transfer rate (DTR) or clock frequency?

The data transfer rate is measured in bits per second (bps or bits/sec or b/s) and the clock frequency (Fclock) in Hz.

DTR is usually ≥ 2 Fclock. Henceforth, it will be safe to use the following rule:

If we don’t know the signal rise/fall time, we can use the following rule:

How to obtain the 3 dB bandwidth?

For a signal with rise/fall time tr, the 3 dB bandwidth is given by the following rule:

Therefore, for a clock of frequency Fclock, we get:

How to analyze a PCB transmission line?

There exists a close analogy between the electromagnetic waves propagation and the propagation of voltages and currents along a transmission line. As it is easier to think in terms of familiar voltages and currents rather than electric and magnetic fields, we should use the voltage/current analysis of the transmission line in the following treatment.

What are the transmission line parameters?

A transmission line is a large number of infinitesimal length segments. Each segment can be analyzed by network theory concepts at a particular point in space and time, ignoring the travel time in the infinitesimal segment as its length is extremely small.

In this analysis technique, we will be dealing with quantities like voltages and currents, and transmission line parameters like resistance, inductance, capacitance, and conductance. We will model an infinitesimal segment of a transmission line in terms of the following parameters:

We can denote the length of the infinitesimal transmission line by Δx.

Then we can picture this transmission line segment as follows:

Let’s do the analysis of this circuit in the frequency domain. Here, we assume that the signals vary with time sinusoidally with an angular frequency ω, so that the time-varying part of V(x,t) and I(x,t) can be shown by the factor

and we now have:

Using Kirchhoff’s laws on the above segment, we obtain the following relations:

And from these, by differentiation, we get:

A solution to this equation is:

If we multiply Equation 4a by

to reincorporate the time variations of the sinusoidal voltages and currents, we will see that now the equations represent voltage and current signal waves traveling in the positive x-direction over the transmission line:

If you would like to learn anything specific about PCB transmission line analysis, please let us know in the comment section.