To achieve this criterion, PCBs are made up of multiple layers. But how are these multilayers connected to each other in order to establish the electrical continuity? This is when a via pops into the picture. 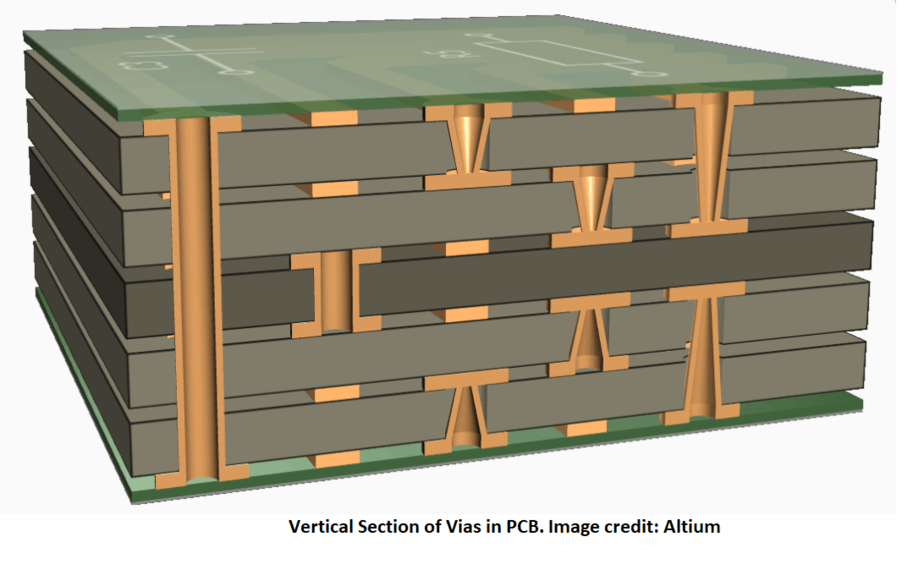 Vias are miniature conductive pathways drilled into the PCB to establish electrical connectivity between the different PCB layers. Basically, a via is a vertical trace in a PCB.

What is a via?

Before we dive deep into a via hole, I will just define in simple terms what a PCB is. PCB is the art of transmission of signals under controlled parameters. A printed circuit board is the groundwork for interconnection of components. The main purpose is to form an electrical connection between the active and passive components without interrupting or interfering with another signal or a connection. So, the basic idea is to form networks of connections without conflicting another one. Hence, PCB is the connection of components where the connections don’t overlap each other.

To achieve this criterion, PCBs are made up of multiple layers. But how are these multilayers connected to each other in order to establish the electrical continuity? This is when a via pops into the picture.

As mentioned before, vias are tiny conductive tunnels that connect different layers of the PCB and allow signals to flow through them. The precision to which a manufacturer can drill a via that meets the designer’s requirement, makes that PCB manufacturer the best in the industry. It’s always a good practice to find out your manufacturer’s capabilities before designing your circuit.

Aspect Ratio for vias in PCBs

Aspect ratio (AR) is the parameter that decides the reliability of a PCB. Let us understand the concept of aspect ratio before discussing more about vias. Aspect ratio is the ratio between the PCB thickness and the diameter of the drilled hole.

Since microvias don’t protrude through the entire board, the aspect ratio will be:

Different kinds of vias in a PCB

Depending on their functionality, there are different types of vias that are drilled into a PCB.

As per IPC standards, buried vias and blind vias must be 6 mils (150 micrometers) in diameter or less.

The most commonly known vias are the microvias (µvias). During PCB manufacturing, microvias are drilled by lasers and have a smaller diameter (as small as 4 mils) compared to the standard vias. Microvias are implemented in high-density interconnection or HDI PCBs.  MicroThe depth of a microvia isn’t usually more than two layers deep since the plating of copper inside these small vias is a tedious task. As discussed earlier, the smaller the diameter of a via, the higher should be the throwing power of the plating bath to achieve electroless copper plating.

Microvias can be classified into stacked vias and staggered vias based on their location in the PCB layers. Additionally, there is another type of microvias called skipvias. Skipvias skip one layer, meaning they pass through a layer making no electrical contact with that specific layer. The skipped layer will not form an electric connection with that via. Hence, the name.

Microvias improve the electrical characteristics and also allow miniaturization for higher functionality in less space. This, in turn, makes room for large pin-count chips that can be found in smartphones and other mobile devices. Microvias reduce the layer count in printed circuit board designs and enable higher routing density. This eliminates the need for through-hole vias. The microvias micro size and capabilities have successively increased the processing power. Implementation of microvias instead of through holes can reduce the layer count of PCBs and also ease the BGA breakout. Without microvias, you would still be using a big fat cordless phone instead of your sleek little smartphone.

Sometimes a via is covered with solder mask so that the via isn’t exposed. This is called as a tented or a covered via.

Since now we have a better understanding of vias, let’s come to the most important part, the via in pad. Sometimes also referred to as via in pad plated over.

The increasing signal speed, board component density, and PCB thickness have led to the implementation of via-in-pad. The CAD design engineers implement via-in-pad or via-in-pad-plated-over (VIPPO) along with the conventional via structures in order to achieve routability and signal integrity requirements.

So, what is a via-in-pad? Let me explain. In traditional vias, the signal trace is routed away from the pad and then to the via. You can see this in the above diagram. This is done to avoid seepage of the solder paste into the via during the reflow process. In via in pad, the drilled via is present right below a pad. To be precise, the via is placed within the pad of a surface mount component.

First, the via is filled with non-conductive epoxy depending on the designer’s requirement. Later, this via is capped and plated to provide conductivity. This technique shrinks the signal path lengths and as a result, eliminates the parasitic inductance and capacitance effect.

The via-in-pad accommodates smaller component pitch sizes and shrinks the PCB’s overall size. This technology is ideal for BGA footprint components and is an essential part of PCB assembly.

To make things better, back-drilling process is implemented along with the via-in-pad. The back drilling is performed to eliminate the signal reflections within the unused portion of the via. The unwanted via stub is drilled to remove any kind of signal reflection. This ensures signal integrity.

Here are a few quick tips that you can consider while employing vias in your design:

Try our PCB Via Quiz

In conclusion, vias are basically wells but not big enough to drop a coin and make a wish. The via technology implemented by your PCB manufacturer could make or break your product. The next time you run into a wishing well do remember to wish for a perfect via.  Check out our next article in this series on designing vias with current carrying capacity.