Flying probe testing is a reliable and cost-effective method to test PCB assemblies as comprehensively as possible given the accessibility constraints of a board design. 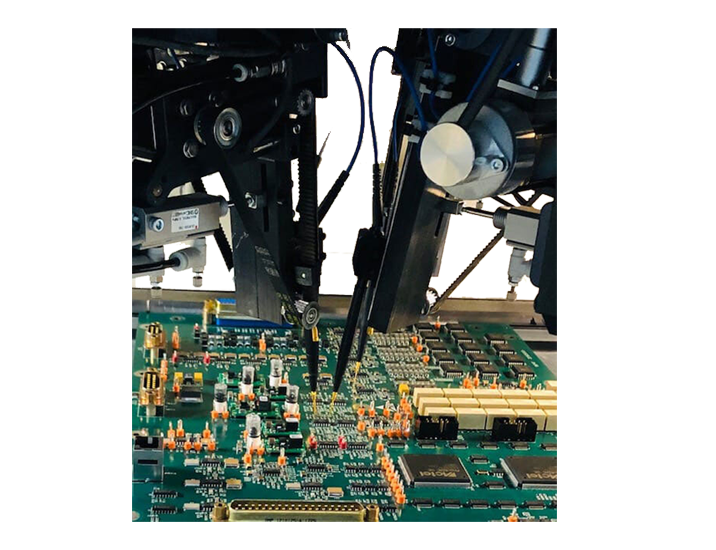 What is flying probe testing for PCB assembly?

The flying probe tester can test for shorts, opens, and component values such as resistance, capacitance, and inductance.

Flying probe testing does not require custom fixtures, hence called a fixtureless in-circuit test when used on an assembled board. This makes it highly cost-effective for prototype and low to mid-volume production.

How we test your PCB assembly

We start by generating a test program which is loaded into the flying probe tester. The circuit board assembly to be tested is then placed on a conveyor belt so that it can move inside the testing area where the probes are present.

When our engineering team runs the test program, the probes will contact the component pads, test pads, and the unmasked vias as per the pre-loaded test program. The tester will apply electrical test signals and power to the probe points and make measurements.

These measurements will be processed inside the tester to find if the circuit portion between the probes is delivering the expected results within the specified tolerances. This is how we detect the defective units.

Inside a probe testing machine

The flying probe tester hardware includes signal generators, DC and AC power supplies, and various sensors. These provide signals required to excite the PCB nodes and make measurements on the component nodes and interconnections and the assembled circuit.

Speak to your account manager today to add flying probe test to your order.

We recommend flying probe testing to customers developing very dense and complex boards. This is our preferred method to test the quality of your PCBA and ensure we can reduce your time to market as much as possible.

Not only is flying probe testing cost-effective for small to medium production runs, it also helps R&D teams to go to market faster by ensuring the viability of their electronics right out of PCB assembly.

As opposed to in-circuit testing that uses pogo pins, a flying probe tester is equipped with fine probe points capable of accessing much smaller pads.

Because the probe movements and landing positions are generated by software, we can easily reprogram them to apply different testing strategies.

Engineers and PCB designers at the world’s most innovative companies choose Sierra Circuits for the highest quality one-stop PCB assembly services, right here in the USA. Fully assembled PCBs that work the first time. Ready to ship in as quick as 24 hours.

Whether you’re an aerospace engineer or a research and development designer on a tight deadline, Sierra Circuits helps you build electronics with zero defects by offering flying probe testing options that inspect your prototype assembled boards.

Get started with Flying Probe Testing for PCB Assembly