The first checklist we like to implement after receiving Gerber files is signal checks. This checklist holds key parameters that include conductor width, spacing requirements, and hole registration. We would like to shed some light on some of these DFM issues that often arise.

Number one on our list of DFM issues is conductor width. Traces on circuit boards connect components to connectors. These traces can be identified as continuous paths of copper that exist on the surface of a PCB. The width of the conductor traces becomes crucial as it directly impacts the functionality of a board. And increasing the signal flow through traces leads to a fair amount of heat. Monitoring trace width also helps to minimize heat build-up that typically occurs on boards. The conductor width also determines the resistance of the traces that directly affect the transmission of a signal.

IPC-2221 gives the formula for calculating the trace width for allowable current:

The cross-sectional area A is calculated by below formula:

Where I is the current, k is a constant, ΔT is temperature rise, and A is the cross-sectional area of the trace.

During the design phase, you should consider the trace width as one of the most important parameters. It is essential to decide the adequate trace width to ensure the performance of the circuit board. This also helps to ensure the safe transmission of current without overheating and damaging the board.

An Impedance and Trace Calculator to Avoid DFM Issues 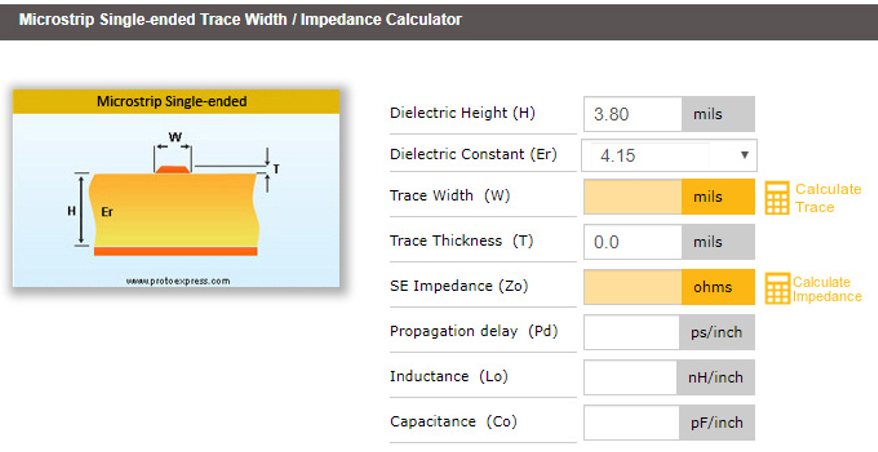 There are various factors that can affect the selection of the right trace width:

For traces located on the inner layer of the PCB, you should follow special guidelines, such as heat dissipation.

We also understand the need for improvements in signal integrity of the circuit. This has helped us to develop our Impedance Calculator for single-ended and differential pair signals. Furthermore, maintaining a proper signal integrity in the PCB reduces losses such as copper loss and noise.

Having said all of this, we typically suggest our customers to opt for larger traces in order to prevent broken connection, provided there is availability of larger space on the PCB. In your design, try to assign separate D-code for the traces which have to be impedance control.

The maximum current carrying capacity of a copper trace usually differs from the theoretical value due to several factors. Some of the factors include number of components, pads and vias. Moreover, large transient surge can lead to the burning down of a trace between pads during initial supply of power or when modifications are implemented on traces. You can consider increasing the trace width to avoid these DFM issues. Solder mask can be applied on PCB traces to avoid transient surge. The solder paste can also be applied on a surface mount technology (SMT) procedure. It is recommended that you determine the current carrying capacity of the trace before you figure out the exact trace width. Of course, other external factors should be taken into consideration. When it comes to fab and assembly, do not forget about contaminant pollution or dust since the excess of pollution leads to partial broken traces.

The standard trace width is 4 mils. The minimum spacing is done to limit excess of losses. Usually, the size of traces on an outer layer shouldn’t be below 4 mils, as plating needs to be performed on these traces. 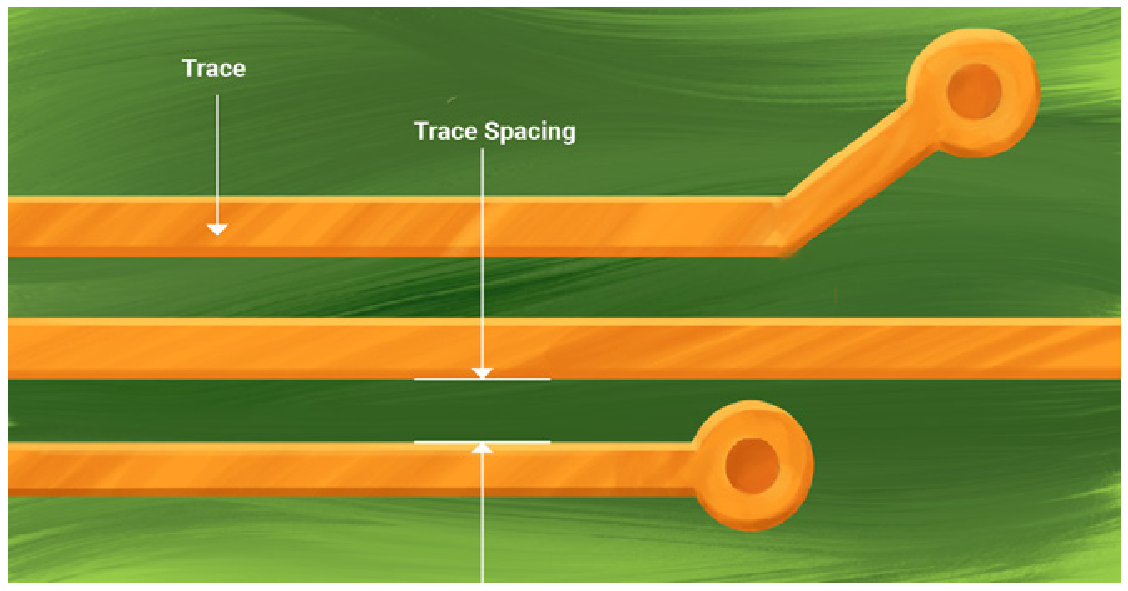 Let’s talk about the importance of PCB line spacing for creepage and clearance. Spacing between PCB traces is another critical DFM issue manufacturers look out for during signal checks. Spacing between traces helps maintain a distance between two traces, thus avoiding flashover or tracking between electrical conductors. The flashover or tracking are defined as an electric breakdown along the surface of the PCB. Flashover can occur along the junction of the conductor trace and insulator. To avoid flashover or tracking between electrical conductors, a few standards and rules were set up in the industry. Factors, such as voltage, application and type of assembly, significantly impact spacing requirements as well. It is difficult to derive a single solution to decide specific spacing requirements to this DFM issue. Various methods and calculations are implemented in order to calculate the proper distance between two traces.

Why Is Spacing Important?

Sierra Circuits has developed certain categories in terms of spacing requirement with respect to copper weight:

Clearance is a crucial parameter while considering spacing between PCB traces. The clearance is defined as the minimum distance through air (medium) between two conductors. Lower clearance among traces can lead to the overhead clearance; overhead clearance may lead to over-voltage, which will result in an arc between neighboring conductive traces. This is a virtually instantaneous fault that does not recur until another such over-voltage event. Faults resulting from insufficient spacing for creepage can take much longer to occur.

The measurement of clearance depends on factors such as the PCB material, applied voltage, and temperature variations. The environmental conditions, such as temperature variations, play a major role in deciding the value for permissible clearance. Additionally, other environmental parameters, such as humidity, decide the breakdown voltage of air and affect the likelihood of arcing. The contamination of dust on the surface of the PCB can cause shortening of the distance between conductors.

Several errors occur while deciding the creepage distance during a high-density design, owing to the complexity of the design. However, several measures are implemented to avoid these errors, such as moving tracks and increasing the surface distance in your design. Designers can avoid spacing errors by adding a slot between traces or placing vertical barriers of insulation. Designers can increase the creepage distance by various tricks instead of changing the trace layout on the board.

It is quite hard for designers to provide adequate clearance during the layout design stage. But major spacing reduction can be established by adopting a double-sided assembly and by the implementation of insulating materials.
For high-voltage nodes, insulating materials act as a sheet barrier, which also covers overexposed high-voltage leads. As most of the board components are SMDs, the circuits that require clearance can be placed on the top and bottom sides of the board. You should maintain clearance from through-hole connection points and the bounding surface.

Tricks, like incorporating V-groove, parallel-sided notch, or placing a slot in your design can effectively solve your creepage issues. So far, we have understood creepage is the spacing between electrical nodes over an insulating surface. We are treating it as the space between conductors on the surface or internal layers of a PCB.

So far, we have understood creepage is the spacing between electrical nodes over an insulating surface. We are treating it as the space between conductors on the surface or internal layers of a PCB.

Why isn’t the annular ring you design the one you get?

Unconnected nets are not a good idea and often cause DFM issues. It can become a source of electromagnetic noise. Designers should remove unintended ground conductor thin traces in copper flooded areas.

When designing a complex board, you may find yourself left with unconnected lines, which are always difficult to locate. During PCB manufacturing, these unconnected lines can result in hairline short defect. However, several design constraints with respect to form factor or manufacturing budget can reduce such defects. The signal checklist allows the identification and correction of these DFM issues. Designers can themselves correct such errors by allowing a larger clearance between copper connections and pads.