How to Reduce EMI to Improve Signal Integrity

EMI may be caused by unexpected radiated emissions as well as though interference conducted along cables and traces. Common reasons for high EMI in PCB circuits include poor grounding, lack of shielding and poor circuit design. Methods to control EMI include the elimination, attenuation and control of emissions at their source. 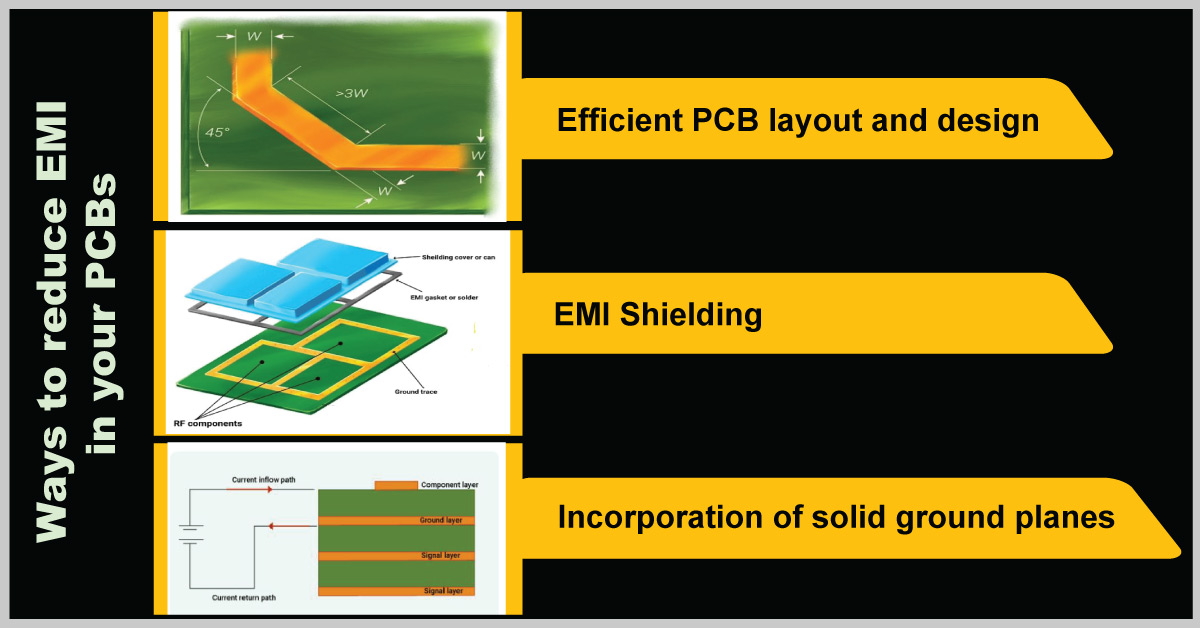 Electromagnetic interference, or EMI, is a major cause of signal integrity problems for PCBs. All circuits generate EMI and get affected by it.

It may be caused by unexpected radiated emissions as well as through interference conducted along with cables and traces. Common reasons for high EMI in circuit boards include poor grounding, lack of shielding, and poor circuit design. Methods to control EMI include the elimination, attenuation, and control of emissions at their source.

EMI is coupled to other circuits through radiation or conduction. In both instances, the degree of coupling and the magnitude of the EMI increases with frequency.

International EMI standards specify the acceptable levels of emissions. Class A devices that are intended for business use have slightly lower, more relaxed limits than class B devices, intended for domestic use. Class B limits are around 25 % more rigid than those for class A. The two main bodies controlling EMI Standards are the FCC and the European CISPR. Although these standards are similar in many ways, the CISPR requirements are slightly tighter.

Refer to the following tables to know the EMI limit according to the classes.

Although this article is primarily about EMI susceptibility, for electromagnetic compatibility to exist, products should be immune to generally acceptable levels of EMI and should not generate EMI that exceeds the levels specified in the standards. Make sure to limit excessive radiation from entering or exiting the board at the entrance point.

It can originate from external or internal sources and can be conducted over cables, connectors, and traces. EMI problems are caused by noise, antennas, and pathways to radiators. Electromagnetic interference is commonly generated from the following:

High-frequency signals: These signals are more prone to excessive radiation, especially if proper shielding is not done. At high frequencies, the inductive effect of a trace or line increases, and as a signal is transmitted, its magnetic field couples the signal to adjacent lines. The effects are aggravated by higher frequencies associated with fast signal rise time.

Impedance mismatching: High-frequency signals in PCB circuits exhibit transmission line characteristics, and reflection and ringing occur if the receiver and transmitter impedances don’t match the characteristic impedance of the trace.

How is EMI coupled

EMI coupling mechanisms describe how it travels between the source and receiver (affected devices). It is crucial to understand the nature of electromagnetic interference and the way it is being transmitted from the source to the receiver to fix the problem. Four kinds of EMI coupling are used to connect a source with a receiver: conduction, radiation, capacitive and inductive coupling. Next, we’ll look at the coupling mechanisms individually.

This occurs when the interfering signal travels along with input cables or connecting wires. Coupling frequencies are generally less than 30 MHz. Any line entering or leaving a board is susceptible to coupling radiation. Interconnecting cables between two sources are a good source of EMI transferring one path to the other side of the board. As such, long cables help control EMI. These types of EMI are common on the power supply lines and are heavily concentrated on the H-field component. On power lines, interference can appear either as common mode conduction (on the +ve and -ve lines or tx and rx lines) or as differential mode conduction. A method for mitigating conduction coupled interference is to use filters and shielding over cables.

EMI radiation occurs primarily at frequencies above 30 MHz. Internally, EMI can be radiated by the electric field generated by a fast transient signal that utilizes a stub or loop as an antenna. EMI can also be inductively coupled. Traces without a return path will generate common-mode radiation and those with a return path produce differential mode radiation. The radiation far-field strength is directly related to frequency in single-ended circuits and the square of the frequency for differential signal circuits. Contrary to conduction, it involves no physical connection between the source and receiver since the interference is emitted (radiated) through space to the receiver.

This happens between two connected devices. Capacitive coupling occurs when alternating electrical signals are transferred from one segment of a circuit to another via stray/parasitic capacitances.

EMI occurs when a conductor induces interference in another conductor nearby based on electromagnetic induction.

Techniques to minimize EMI include the control, attenuation, and elimination of emissions at the source as well as designing for clean and smooth transitions that are precisely placed in time. Here are several ways this can be achieved:

Auto-group the recurring circuit blocks to speed up the routing process.

See our interview with Rick Hartley on how grounding controls emi and noise in pcb.

Electromagnetic interference affects PCB design in two ways, through generation and susceptibility. Although the focus has been on reducing the effect of internal and external EMI within boards, these techniques are equally effective in reducing emissions. Limiting the deleterious effects of EMI significantly improves signal integrity on boards. Please let us know in the comment section if you have any questions about EMI and signal integrity.