The Importance of PCB Line Spacing for Creepage and Clearance 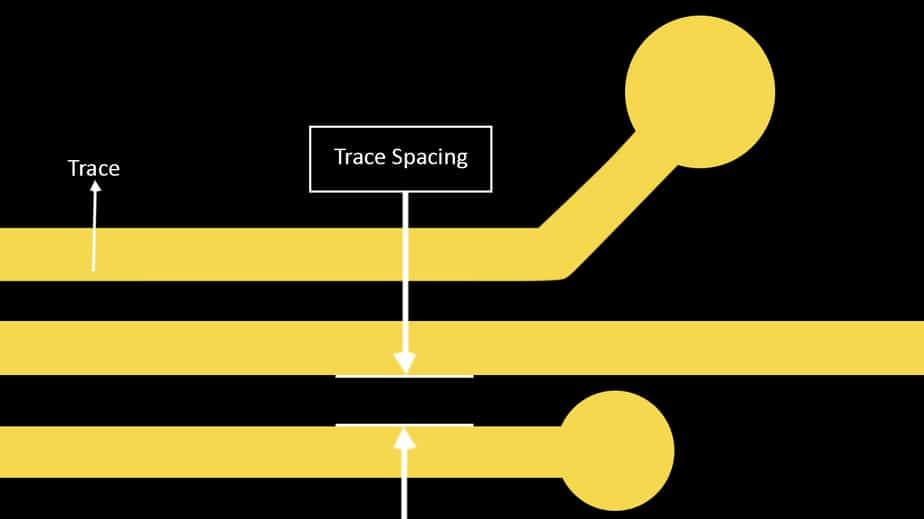 Spacing is important, whether it’s in your day-to-day life or in the PCB industry. Consider, you have a noisy neighbor, won’t you prefer to have more space between you? PCB traces are no exception. Let us tell you about the importance of PCB line spacing. We will also discuss creepage and clearance as well as PCB component spacing.

What is the minimum PCB line spacing?

The shifting trend towards miniaturization of electronic circuitry poses substantial challenges to the designer, specifically in mixed technology that includes high voltage circuits. Most of the electronic circuits require compact PCB design, whether, it is your smartphone or handheld medical imaging systems. Earlier, the use of high voltage boards as a separate board was a common practice in a multi-board system.

With miniaturization, it is possible to merge multiple boards, which also allows the designer to utilize mixed technologies, including analog, digital, and RF circuits. Design considerations have become a primary concern for PCB manufacturers as high-voltage circuits require additional rules to form increased electrical clearances and isolation for operator safety. These rules help to find ways for implementing precise circuit formation and reducing overall product size.

What are the PCB creepage and clearance standards? 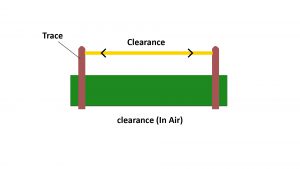 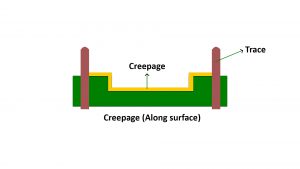 Clearance is defined as the minimum distance through air between two conductor traces. While creepage is termed as the shortest distance between conductor traces on a PCB along the surface of the insulation material. Unlike clearance, which is measured in air, creepage is measured along the surface of the insulation material. We have discussed both creepage and clearance in our previous blog about high-voltage circuit boards.

How to solve creepage and clearance issues?

Designers are unable to solve issues related to clearance at layout design as the measured distance is along the air pathway (line of sight). Component placement will likely reduce errors occurred during spacing. However, key factors, such as the usage of insulating materials and the adoption of double-sided assembly, play a critical role while determining PCB component spacing requirements.

Insulating materials acts as a sheet barrier between the high voltage nodes. They also sleeve or cover overexposed high voltage leads. There is a high proportion of PCB components belonging to the surface-mounted category, which allows designers to place circuits as per the requirement of clearance on opposite sides of the board. It is also important to maintain clearance from the bounding surface and through-hole connection points that are already present on the board. Nodes within the same high voltage circuits at the same potential does not require increased clearance or creepage. However, low voltages circuits have to meet clearance requirements.

Few international standards have suggested the use of conformal coating for limiting issues related to the clearance. The conformal coating is applied as per the design requirement. Minimum creepage distance can solve tracking failures. Avoiding the conductive path along the insulator surface limits tracking failures. Several factors affecting creepage and clearance include:

Working Voltages for Creepage and Clearance

A working voltage is defined as the highest voltage across any particular insulation when the equipment is subjected to a rated voltage. This definition is stated in various international standards, including IEC 950 and EN 60950. The values of the creepage and clearance are calculated by determining the working voltage under a certain operating voltage. While determining working voltages, we need to evaluate both peak and root-mean-square (RMS) voltages. The peak value of the DC voltage will determine the clearance, and the RMS value of the AC voltage will determine the creepage distance.

Based on the working voltage, we calculate the minimum PCB line spacing. For instance, the working voltage of the 609V secondary circuit will withstand the peak voltage of 2700V as per IEC-60950-1, so the root-mean-square (RMS) voltage will be 2700V*√2= 3818V. As per UL 796, the 40V/mil criterion is applied to calculate the required minimum distance. So, the spacing between the two traces would be 3818/40=95.45 mils.

The above table shows how peak-to-peak voltage values vary with working voltages as per IEC-60950-1.

According to the IEC 60664.3 standard, the pollution degree is divided into four major categories:

Several steps are taken to avoid the effect of pollution degree on the creepage and clearance. These steps are taken in accordance with the several design features related to the PCB line spacing and the operating characteristics of the system. For instance, pollution degree 2 is avoided by limiting the accumulation of humidity or dust particles via the provision of ventilation. Also, heaters and fans will avoid contamination. The continuous energizing or application of heat is highly preferred for cases in which equipment is operated without interruption. Continuous energizing also avoids the excess of cooling so the condensation won’t occur.

Furthermore, pollution degree 3 is avoided with the use of the appropriate enclosures. These enclosers limit external environmental factors such as moisture.

Typically, a single level of insulation is preferred for the electronic circuits that are not accessible. However, we prefer the use of double level insulation for protection against hazardous voltage. Several rules must be followed to implement a double-level insulation system.

The insulation barriers are necessary for circuits that fall under safety extra-low voltage (SELV) standards. The user-touchable voltage or safety extra-low voltage (SELV) systems are termed as an electrical system in which the voltage cannot exceed a permissible value under normal conditions that are defined under IEC and EN 60335 standards. These SELV voltages must be non-hazardous. These SELV circuits operate at low power and logic levels, such as ±3.3 to ±24 VDC. Some of the examples of SELV circuits include input/output connectors and cables that are attached to peripheral devices such as printers and keyboards.

Insulation types are majorly categorized into five different types, which are termed functional, basic, double, supplementary, and reinforced. Definitions for these insulation types are mentioned in multiple standards and are quite complex in nature. It is important for designers to know all these rules and apply them in the design as per the requirement.

It is highly critical to insulate hazardous voltages from safety extra-low voltage (SELV) circuits. Following insulation types are defined as per international standards:

These safety standards help designers to protect the electronic circuit from an abnormal (single-fault) condition. Single-fault conditions are avoided by implementing double or reinforced insulation, where a second layer remains for protection.

Conductive anodic filament (CAF) is the metal filament, which is caused due to the electromigration of copper in a printed circuit board. This further leads to device failure. The growth of CAF bridges two oppositely polarised copper conductors. CAF occurs in four different ways such as through-hole to through-hole, line-to-line, through-hole to the line, and layer-to-layer. CAF majorly takes place due to the two key factors including a test or bias voltage (voltage applied during the testing of the device) and high relative humidity. CAF failure particularly occurs in the hole to hole as showcased in below diagram.

The growth of the metal filament is typically from a copper anode to a copper cathode, which ultimately leads to the electrical failure of the electronic circuit. CAF occurs in two stages: the degradation of the resin glass interface, and an electrochemical migration of copper causing the filament growth.

The degradation of the resin glass interface is a reversible process where the material’s insulation resistance is returned after baking and drying processes. The second step of actual CAF growth is believed to be irreversible. The time required for CAF failure to occur is dependent on test voltage, relative humidity, spacing, temperature rise, and the resin system.

The degradation of the resin glass interface takes as the PCB behaves like a cell, with the occurrence of the following reaction:

In some cases, where electrical safety and voltage isolation is given high priority, creepage and clearance, and isolation distances matter significantly. The terminal, connector and PCB component spacing are well-defined in several international standards. However, we will be dividing spacing into two parts such as:

2) Spacing between the uninsulated live parts with opposite polarity. This includes the terminal, connector, bare wire, adjacent component spacing, etc…

The use of a high-temperature silicone potting on the device terminals allows an increase in spacing between two life parts on the circuit. Automatically, this measure will improve the electrical safety increasing the “spacings” of the terminations offering a higher pollution degree level.