Join Our Virtual Tour
How To PCBPCB Manufacturing

How to Use Via-in-Pad for PCB Design and Manufacturing

Multi-layered printed circuit board design requires a means to establish connections between various layers. This is done using vias ranging from through-hole vias to via-in-pad technology. While traces serve as horizontal connection elements, vias function as vertical connection elements, enabling signal and power to travel between board layers. 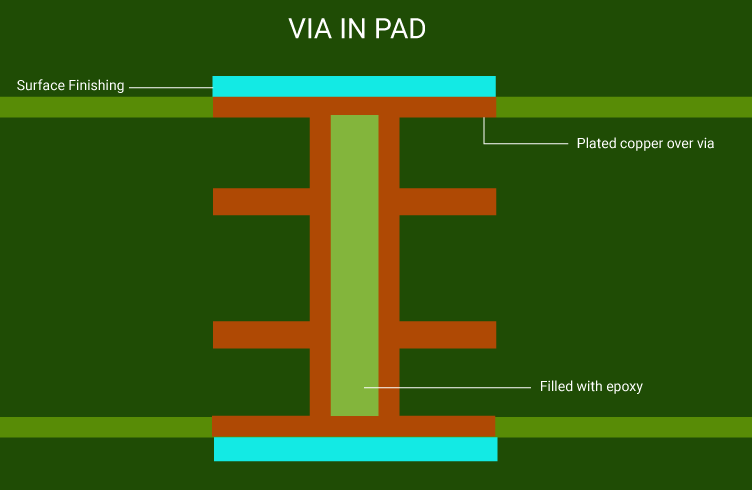 Multi-layered printed circuit board design requires a means to establish connections between various layers. This is done using vias ranging from through-hole vias to via-in-pad technology. While traces serve as horizontal connection elements, vias function as vertical connection elements, enabling signal and power to travel between board layers.

Before we talk about via-in-pad technology, let’s have a look at the different types of vias that are frequently used in PCB design based on functionality:

What are the different types of vias?

Most PCBs contain these vias to establish connectivity between PCB layers:

This is the most common via type and is a hole drilled through all layers of a PCB. It is the simplest via type and is most cost-effective. It however takes up more space on your PCB, reducing space required for components.

This via connects the external layers with the internal layers of the PCB without going through the whole PCB.

Microvias are minute holes with the size equal to or less than 6 mils, drilled in a PCB using a laser. Microvias are generally implemented in HDI PCBs. 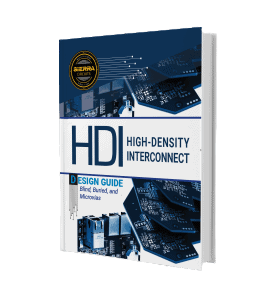 Vias play a crucial role in interconnection as they are used to route electrical signals between layers. Refer to our post on designing a via with current-carrying capacity to understand factors affecting via current, via fabrication types, etc.

Here the via is placed directly on the copper pad of a surface-mounted component and plated with copper (VIPPO), as opposed to a conventional via in which the signal carrying trace is routed away from the pad (dog-bone), to the via. A via-in-pad serves the function of miniaturizing the PCB form factor by reducing the space taken up by trace routing. The most typical applications of these via-in-pads are with BGA components of pitches 0.5mm or less.

The use of via-in-pad technology minimizes signal path lengths which cuts down on the parasitic inductance and capacitance effect.

Try our PCB Via Quiz

What are the advantages of via-in-pad (VIP) routing?

VIP routing is used when the board size is limited, the design components have very small footprints, and when the surface routing options are restricted by design. VIP routing is typically used with BGAs.

It is also worth noting that when PCBs have complicated devices in compact areas, designers place vias in the surface mount device (SMD) pads to fan out the connections. If your design has via-in-pad features on SMD pads, Sierra Circuits can fill the vias with non-conductive epoxy filling to obtain the best quality for assembly soldering.

There are other advantages for the PCB as well when using VIP routing. When you compare via-in-pad to other routing options, 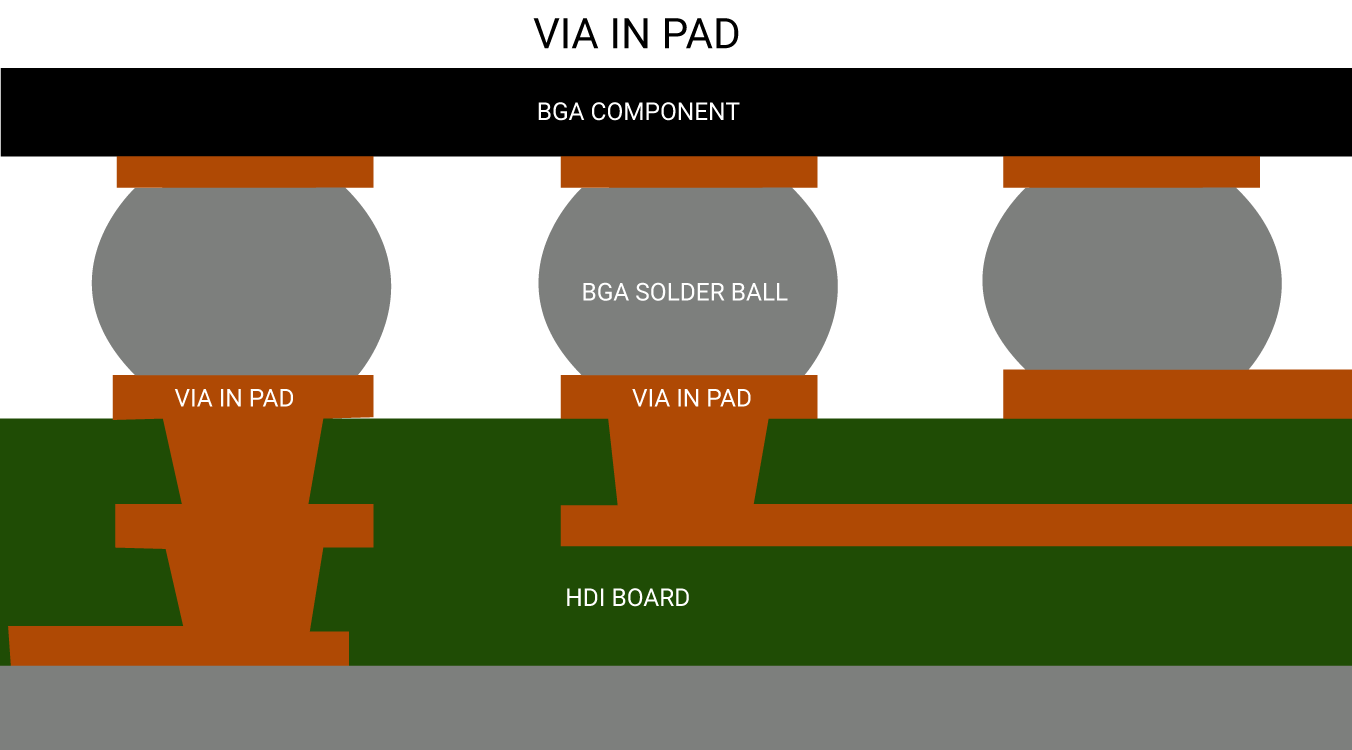 The Downside of Capped Via/Via-in-Pad Technology

VIP routing can be achieved by overcoming certain complexities in manufacturing. The manufacturer will have to eliminate surface bumps, complicating the process required to attach components such as BGAs as stated below:

You can use solder mask as a plugging medium to prevent solder being drawn into the via cavity, which is a conventional method. In case of VIP structures, however, you require a completely filled via cavity to eliminate the air entrapment and outgassing. You will also require a precisely flat planar surface to attach BGAs of fine pitch, reliably.

Manufacturing options you can use for VIP are mechanically drilled, plated and non-conductive epoxy filled method and laser-ablated and fully copper filled via-in-pad methods.

Mechanically drilled via-in-pad holes as stated need to be filled with epoxy. The choice of epoxy depends largely on the coefficient of thermal expansion (CTE) of the via-in-pad fill material and the laminate used. This is important because as the PCB undergoes heating and cooling phases during stack-up, the fill material will move with or against the surrounding laminate board material. It can cause stress-induced fractures and even electrical circuit breaks.

Since non-conductive epoxies have CTEs that are a closer match to that of laminates, you choose them often. This is also a cost-effective option as well. The design and intent of a PCB will ultimately decide the type of epoxy that is required for a via fill.

One major feature of component/device footprint determines the manufacturing method used to generate a via-in-pad – the pad diameter. To meet minimum annular ring requirements for IPC Class 2 or Class 3, pad size should be enough to allow for via diameter and along with the material size needed for manufacturing tolerances.

The most frequent scenarios for use of via-in-pad technology are as given below. Sierra Circuits’ online offering can handle all such scenarios if the vias are at least 6 mils (.006″) wide.

Learn more about QFN packages here: What Are QFN Packages?

In certain cases, you don’t have to fill vias. In these scenarios you don’t need to mark them as “via-in-pad” features using Sierra Circuits online quoting.

Thermal pads don’t require soldering, so you don’t need to count them as via-in-pad for online quoting.

When you don’t actually place vias on the pads, you won’t need to fill the vias. Hence you don’t need to mark these as via-in-pad in the Sierra Circuits online quoting tool.

If the PCB design calls for creating vias-in-pad, you need to reduce problems in manufacturing and minimize excess cost and time needed for this particular type of routing.

You can use the via-in-pad guidelines given below for surface mount device routing:

Electronic components are always shrinking in size, and hardware engineers will need to learn and use innovative tools and techniques to install these components in a way that is scalable and reliable. Via-in-pad technology is a great step towards innovative PCB build techniques.