Every day, PCB designs and components become smaller, faster – in other words, more complicated. It is now crucial to understand your critical nets and traces, impedances, and how the board impacts the performance of the signal. 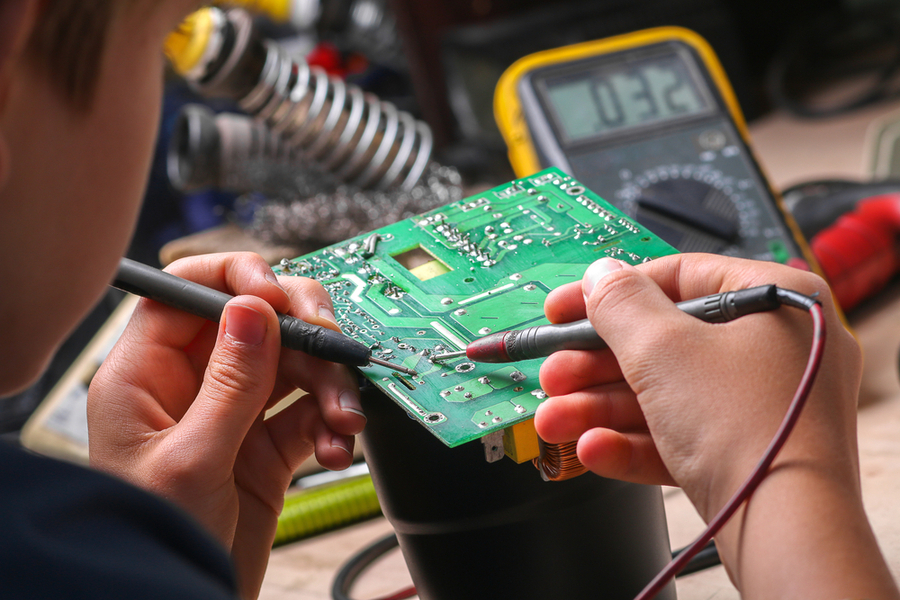 Every day, PCB designs and components become smaller, faster – in other words, more complicated. It is now crucial to understand your critical nets and traces, impedances, and how the board impacts the performance of the signal.

The time of simple interconnecting traces and conductors is over. Nowadays, the speeds of the circuits are increasing day by day, and signals in the GHz range are common. Hence, the controlled impedance of traces plays an important role in signal integrity and the performance of circuit boards.

What is a controlled impedance?

Why do you need controlled impedance?

At high-frequency, the signal traces on a PCB act like transmission lines, which have impedance at each point on the signal trace trajectory. If this impedance varies from one point to the next one, there will be a signal reflection whose magnitude will depend on the difference between the two impedances. The larger the difference is, the greater the reflection will be. This reflection will travel in the opposite direction of the signal, which means that the reflected signal will superimpose on the primary signal.

As a result, the original signal will be distorted: the signal intended to be sent from the transmitter side would have changed once it gets to the receiver side. The distortion may be so much that the signal may not be able to perform the desired function. Therefore, to have undistorted signal travel, the PCB signal traces must have a uniform controlled impedance to minimize signal distortions caused by reflections. This is the first step to improve the integrity of the signals on the PCB traces. For better understanding, read the effects of high-speed signals in a PCB design.

Factors that affect the controlled impedance

Factors that influence the PCB impedance tolerances include materials’ resin content percentage, Dk values of the resin and the type of the glass cloth used, and other physical PCB tolerances like trace height and width at the top and bottom of the trace. When you give Sierra your PCB design– copper patterns, hole patterns, and final material thicknesses– we laminate the copper layers into a single circuit board. We manufacture your PCB with the right pattern sizes and positions within certain tolerances. You must ensure that your manufacturer provides you the right size, position, and tolerance of your etched features. If not, your boards will vary from each other, making debugging performance-related issues very difficult.

Why is it good to specify the dielectric of the board instead of CI?

How to design a board with controlled impedance?

You should follow the below-mentioned controlled impedance routing tactics for designing a PCB:

Annotate the schematic with impedance requirements

The design of a board starts with the design of the circuit schematics by the design engineer. The engineer must specify controlled impedance signals in the schematic and classify specific nets to be either differential pairs (100Ω, 90Ω or 85Ω) or single-ended nets (40Ω, 50Ω, 55Ω, 60 Ω or 75Ω). It’s a good design practice to add N or P polarity indication after the net names of the differential pair signals in a schematic. The engineer should also specify particular controlled impedance layout design guidelines (if any) to be followed by the layout designer, either in the schematic or in a separate “Read Me” file.

A PCB trace is defined by its thickness, height, width, and dielectric constant (Er) of the PCB material on which the traces are etched. While designing controlled impedance PCBs, it is essential to take care of these parameters. You can provide the manufacturer with the number of layers, the value of the impedance traces on specific layers (50Ω, 100Ω on layer 3), and materials for PCB designing.

The manufacturer gives you the stack-up that mentions the trace widths on each layer, the number of layers, the thickness of each dielectric in the stack-up, trace thickness, and PCB material. He also takes care of the controlled impedance requirements by calculating the feasible thickness, width, and height for the traces that need impedance control. Stick to the following relationships to know how impedance depends on dimensions:

Avoid these routing mistakes when designing for controlled impedance

Differentiate CI traces from other traces

The controlled impedance trace widths must be distinguishable from the remaining traces on the board. It allows the PCB manufacturer to quickly identify them and make suitable changes to the trace width if necessary, to achieve a specific impedance. For example, if you require a 5mil trace to achieve 50Ω impedance and if you have also routed other signals with 5mils width, it will be impossible for the PCB manufacturer to determine which ones are the controlled impedance traces. Therefore, you should make the 50Ω impedance traces 5.1mils or 4.9mils wide.

The table below shows trace widths and spacings for controlled impedance on different layers. Non-impedance signal traces should not be routed with 3.5, 3.6, 4.2, 4.25, and 4.3mil trace widths.

Components or vias should not be placed between differential pairs, even if the signals are routed symmetrically around them. Components and vias create a discontinuity in impedance and could lead to signal integrity problems. For high-speed signals, the spacing between one differential pair and an adjacent differential pair should not be less than five times the width of the trace (5W). You should also maintain a keep-out of 30mils to any other signals. For clocks or periodic signals, you should increase the keep-out to 50mils to ensure proper isolation.

You should minimize the use of vias for differential pairs, and if you do place them, they need to be symmetrical to minimize discontinuity.

Length matching will achieve propagation delay matching if the speed of the signals on various traces is the same. Length matching may be required when a group of high-speed signals travel together and are expected to reach their destination simultaneously (within a specified mismatch tolerance).

The lengths of the traces forming a differential pair need to be matched very closely; otherwise, that would lead to an unacceptable delay skew (mismatch between the positive and negative signals). The mismatch in length needs to be compensated by using serpentines in the shorter trace. The geometry of serpentine traces needs to be carefully chosen to reduce impedance discontinuity. The figure below shows the requirements for ideal serpentine traces. Read our post on how we manufacture controlled impedance PCBs.

When a differential pair signal changes from one layer to another using vias and has a bend, each segment of the pair needs to be matched individually. Serpentines should be placed on the shorter traces near the bend. You need to manually inspect for this violation as it will not be caught in Design Rule Checks since the lengths of the total signals will be closely matched. Since the signal speed of traces on various layers may be different, it is recommended to route differential pair signals on the same layer if they require length matching. Also, check our post on how to route differential pairs in KiCad.

Reference layers for the return path of controlled impedance signals

High-speed signals should not be routed over a split plane because the return path will not be able to follow the trace. You should route the trace around the split plane for better signal integrity. Also, make sure that the ground plane is a minimum of three times the trace width (3W rule) on each side.

You should avoid both split plane obstructions and slots in the reference plane just underneath the signal trace. If the slots are unavoidable, stitching vias should be used to minimize the issues created by the separated return path. Both pins of the capacitor should be connected to the ground layer and should be placed near the signal.

When vias are placed together, they create voids in reference planes. To minimize these large voids, you should stagger the vias to allow sufficient feed of the plane between vias. Staggering the vias allows the signal to have a continuous return path.

If a high-speed differential pair or single-ended signal switches layers, you should add stitching vias close to the layer change vias. This practice also allows the return current to change ground planes.

If a high-speed signal trace switches to a layer with a different net as reference, stitching capacitors are required to allow the return current to flow from the ground plane through the stitching capacitor to the power plane. The placement of the capacitors should be symmetrical for differential pairs.

If an impedance coupon is not functional or fails the impedance test, Sierra performs impedance testing on boards to verify if the product is within the specifications or a remake would be required with necessary adjustments.

However, it is critical to test the impedance from the boards due to the length of the traces, which depends upon the size of the board. The location of the inner layer impedance traces on the finished product is very crucial as well.

How to use Sierra Circuits impedance calculator

Sierra Circuits Impedance Calculator employs a 2D numerical solution of Maxwell’s equations for PCB transmission lines. It provides accurate and suitable impedance values for circuit board manufacture. The tool also estimates trace parameters such as capacitance, inductance, propagation delay per unit length, and the effective dielectric constant of the structure.

Our tool features various microstrip and stripline structures for single-ended and differential models. Choose the right mode based on the geometry of the signal layer and the relevant reference plane(s).

To calculate the trace width for a specific impedance value, input the following data:

Note: You can select the unit (mils/inches/mm/um/cm) of these parameters using the dropdown at the left bottom. Also, if you require any assistance with dielectric constant click on Show Material Dielectric Constant Guide. This provides the dielectric constant of various commonly used materials.

After providing all the necessary data, hit calculate besides the trace width field.

The calculator now displays the values of the following parameters:

If you want to calculate the impedance for a known value of trace width, key in the following:

This displays the required impedance value along with previously mentioned parameters.

Most of the free online impedance calculators may not provide precise data as they’re based on empirical formulas and don’t account for the trapezoidal shape of the trace or the effect of numerous dielectric materials. Our Impedance Calculator considers these paramount factors to impart the most accurate data.

Let us know in the comments section if you would like us to assist you with your controlled impedance design.