How to Reduce Parasitic Capacitance in PCB Layout

A PCB consists of several parallelly spanned conductors, say traces, separated by an insulator. These traces, along with dielectric material, form a capacitor, resulting in an unwanted parasitic capacitance or stray capacitance effect. 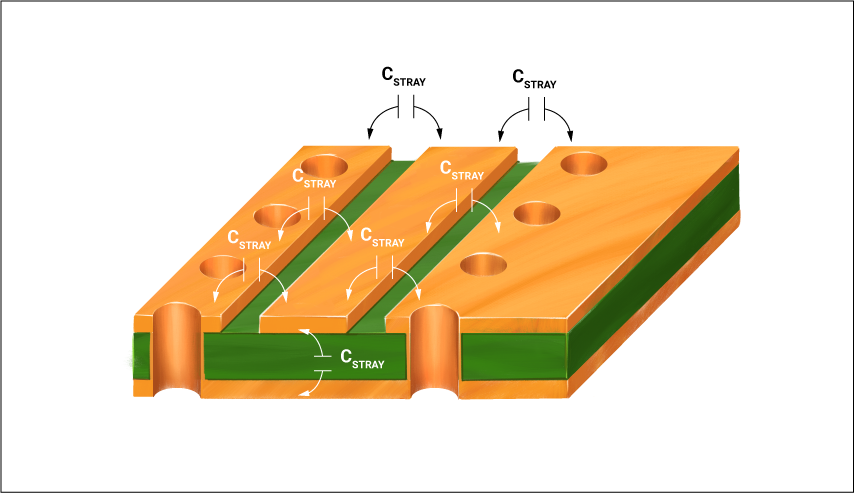 A PCB consists of several parallelly spanned conductors, say traces, separated by an insulator. These traces, along with dielectric material, form a capacitor, resulting in an unwanted parasitic capacitance or stray capacitance effect.

In the following sections, we will understand the definition of parasitic capacitance and its impact on our board.

What is parasitic capacitance in a PCB?

Parasitic capacitance or stray capacitance is the result of a virtual capacitor formed between two traces separated by a dielectric. It occurs due to the potential difference generated when the current-carrying traces run in close proximity. To learn more, read the role of trace current capacity in PCB design.

This effect is even possible if the conductors are appropriately insulated. It is not possible to avoid parasitic capacitance since no electrical circuit is ideal.

How is parasitic capacitance calculated?

The capacitance of a parallel plate capacitor is given by C= (kA/11.3d)pF. Where C is capacitance, A is the plate area in cm2, k is the relative dielectric constant of board material, and d is the distance between the plates in cm.

What is parasitic capacitance effect?

What is stray capacitance?

What is parasitic resistance in a PCB?

Parasitic resistance exists in series along traces or as a shunt between the conductive elements.

What is parasitic inductance in a PCB?

Parasitic inductance exists along a trace and exhibits the behavior of storing and dissipating electrical energy, like an actual inductor. All conductors are inductive, and at high frequencies, the inductance of even relatively short pieces of wire or PCB traces may be important.

Where R is the wire radius, and L is the length.

How to find the inductance of a PCB trace?

For example, a 2.54cm trace at the non-inverting input of a high-speed op-amp will result in 29nH stray inductance. And this is enough to initiate low-level oscillations. Stray inductance can be alleviated using a ground plane.

Parasitic capacitance can give you chills during high-frequency operation since a capacitor acts like a wire at an infinite frequency. This is the reason why it can accidentally connect the reference plane of any PCB to the chassis.

Parasitic capacitance effects could be crosstalk and noise, undesirable feedback from the output, and the formation of resonant circuits. So, it is essential to give attention to the overall PCB design, specifically to the layout. A good layout should take utmost care while placing a conductive body by the side of another conductive body.

Parasitic elements include inductors formed by package leads, long traces, pad-to-ground, pad to power plane, and pad to trace capacitors, including interactions with vias, etc. Understand parasitic elements as parasites, a threat to your circuit performance. Unwanted and unavoidable but controllable at the same time.

Let us take an example of a typical schematic of a non-inverting op-amp (figure a). Check figure b with parasitic elements:

To learn more about schematic symbols and schematic diagrams, read our article What’s the Meaning of a Schematic Diagram?

In high-speed circuits, a few tenths of a picofarad are enough to influence the circuit performance. For example, 1pF of parasitic capacitance at the inverting input can cause 2dB of peaking in the frequency domain. And if it is more than 1pF, it can cause instability and oscillations.

Vias also act as parasitic elements. They introduce both capacitance and inductance.

The parasitic inductance of a via is given by:

Where T is the thickness of the dielectric and d is the diameter of the via in cms.

The parasitic capacitance of a via is given by:

Keep in mind that inductive vias combined with parasitic capacitance can form resonant circuits. The self-inductance of a via is small enough that these resonances are in the GHz range, but inductors add in series, lowering the resonant frequency. Do not put several vias on a critical trace of a high-speed circuit. Another concern is that the vias create holes in ground planes, creating ground loops. They should be avoided. The best analog layout must route all signal traces on the top layer of the PCB. Read 11 best high-speed PCB routing practices.

Capacitors block low-frequency and DC signals and pass high-frequency signals in electronic circuits. This property of capacitors to pass high-frequency signals (the rate at which capacitors discharge is another reason they are used in place of batteries that are much slower) is responsible for stray capacitance problems in high-speed circuits. For conductors, the stray capacitance can introduce EMI or noise that will propagate down the wires and cables or transfer to nearby adjacent traces. Usually, eliminating stray capacitance is not possible. Still, there are effective ways to mitigate it at the PCB layout level.

What is the point of using a time-domain reflectometer (TDR) for measuring inductance or capacitance when there are several readily, excellent resolution LCR meters available? The answer is TDR supports measurements on devices and structures as they exist in the circuit. While measuring parasitic elements, the surrounding environment of a device may affect the quantity to be measured. For valid measurements, it is critical to perform measurements on the device as it exists in the circuit.

Also read about circuit simulation in our article How Does Circuit Simulation Work?

On the other hand, TDR fires a step wave on the PCB trace and observes the waveform reflected from via discontinuity. The amount of ‘excess’ capacitance caused by the via can be calculated by integrating and scaling the reflected waveform. This method provides the correct capacitance value for the model.

Unfortunately, it is not possible to completely eliminate parasitic elements. However, there are some simple PCB layout choices you can make to reduce the parasitic capacitance effects. Selecting the right components can also prevent signal problems that arise from parasitic capacitance and inductance. Accurate design and manufacturing decisions can control these parasitics.

How to Generate PCB Assembly Files

I just made a quick calculation of via inductance for a 62 mil board and 15 mil diameter via, through and through. I converted to mm of course. I get 12 nH. That’s preposterous. The actual value is closer to 1.5 nH. It looks like you’re only off by an order of magnitude there.

Please convert the values for ‘T’ and ‘d’ in cms and try calculating again. Thank You!

Subscribe today to get PCB design tips and prototyping advice that will come in handy.