The restrictions posed by the PCB trace current capacity are critically important when it comes to PCB design. While the IPC-2221 generic design guide is a great place to start, PCB trace width calculators provide accurate values which can be used for board design. 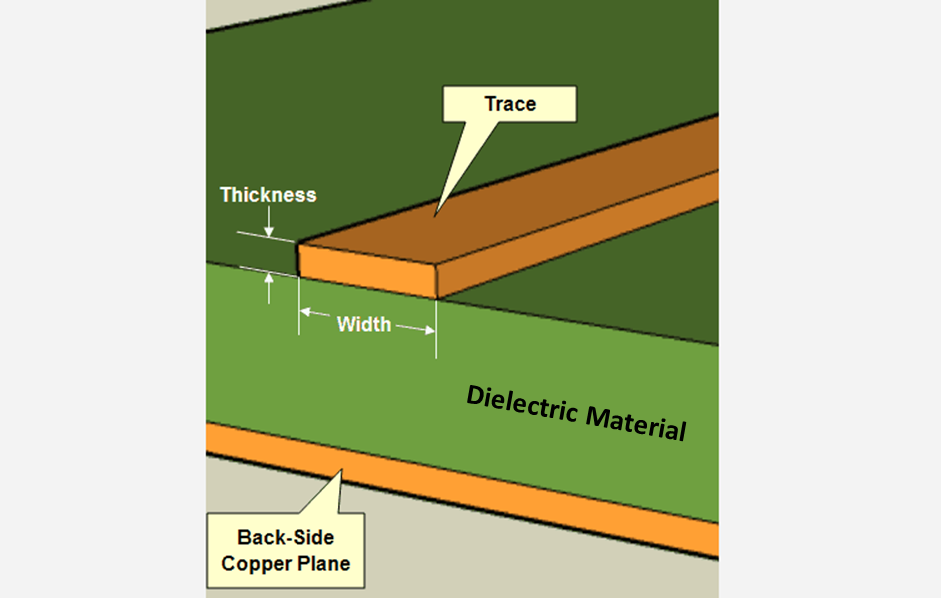 The restrictions posed by the PCB trace current capacity are critically important when it comes to PCB design. While the IPC-2221 generic design guide is a great place to start, PCB trace width calculators provide accurate values which can be used for board design.

The current capacity of a trace on a PCB is decided by parameters such as trace width, the thickness of the trace, maximum temperature rise required, and whether the trace is in the inner or outer layer and whether it is covered by solder mask.

We will, in the course of this article, discuss:

What is PCB trace width?

A PCB trace or PCB track is a copper conductor on the PCB that conducts signals on the surface of the PCB. It is the flat, narrow portion of the copper foil that is left behind after etching. The electricity that flows through the copper traces generates a significant amount of heat. Correctly calibrated PCB trace width and thickness help minimize the buildup of heat in your board. The wider the trace, the lower the resistance to current and lesser is the heat build-up. As shown in the image below, the PCB trace width is the horizontal measurement of a trace whereas the thickness is the vertical dimension of the trace.

There are several factors to consider when determining the right trace width:

The cross-sectional area of the trace impacts via current-carrying capacity.  In such a case, increasing trace width will achieve a proper current rating.

How do you design a high-current PCB?

Digital, RF, and power circuitry mostly process or transfer low-power signals. These applications have copper weights from 1-2oz and carry current from mA to 1A or 2A. Some applications such as motor controls require currents up to 50A, this will require higher copper weights on the PCB and larger trace widths.

These are guidelines for the design and manufacture of high-current PCBs:

Longer traces have higher values of resistance and also carry higher currents leading to larger power loss. Since the power loss generates heat, board life will reduce. Therefore, it is critical to keep traces carrying large currents as short as possible.

Trace width is a function of variables like the resistance and current through it along with the permitted temperature rise. Conventionally, a temperature rise of 10°C is allowed above the ambient temperature of 25°C. In case board material and design permit, it is even possible to allow for a 20°C temperature rise.

Some electronic components like voltage references, analog to digital converters, and operational amplifiers are sensitive to temperature changes. When such components are subjected to heat, their signal can change.

High-current boards are known to generate heat, therefore the components mentioned above need to be thermally isolated to a certain level from the hotspots. You can do this by having board cutouts and providing thermal relief connections.

To increase the current capability of a trace you can remove the solder mask which exposes the copper underneath. Then additional solder can be added onto the trace, which will grow its thickness and reduce resistance. This will allow more current to flow through the traces without an increase in trace width or incurring the costs of additional copper thickness.

Field Programmable Gate Arrays (FPGAs) and processors come in Ball Grid Array (BGA) and Line Grid Array (LGA) packages and have high current requirements. To enable high current flow, you can have square polygon pours right under the chip and then have vias drop down and connect to them. You can then link the polygon pour to thick power traces or power planes.

Electric automobiles and high power inverters where the current exceeds 100A, copper traces might not be the best way to transmit power and signal. In this case, you can use copper bus bars that can be soldered onto PCB’s pads. Copper bus bars have a much higher thickness than traces and can carry high currents as required without any heating issues.

When a trace is not able to carry the needed current in a single layer, the trace can be routed on multiple layers and be subjected to via stitching linking the layers. This will increase the current-carrying capacity in cases where the trace thickness is the same on both layers.

What is a PCB trace width calculator?

Trace width depends on many factors such as copper layer thickness, length of trace position of trace, and so on, making it hard to calculate accurate values manually. This is why most enterprises that manufacture PCBs provide tools to calculate trace width. A PCB trace width calculator is a tool that takes into account all the factors mentioned above to provide an accurate value for the trace width required.

According to the IPC-2221 Generic Standard on Printed Board Design, PCB trace current limits can be classified further into internal and external conductors. The graphs given below show the relationship between different variables related to trace width. The variables are trace cross-sectional area, temperature rise, and maximum current carrying capacity for external conductors and internal conductors.

Based on the graphs, a formula to calculate current carrying capacity is given below:

A = Cross-sectional area of copper trace in mil²

I = Current carrying capacity in Amperes

The existing PCB trace width calculators are still based on the data in the graphs and the formula that is given above. They serve as handy tools for PCB designers to calculate trace width with great accuracy. The maximum current carrying capacity for 2oz copper with a temperature rise of 10°C is mentioned in this table.

While determining trace current capacity, there are complex factors at play. However, PCB designers can count on the reliability of trace thickness calculators to help design their boards efficiently. Getting the trace width and its current carrying capacity right can go a long way in designing PCBs that are reliable and high performing.