EMI goes up as faster edge speed produces shorter wavelengths relative to the bus length, creating unintended radiated emissions. These emissions increase crosstalk and can cause a high-speed PCB design to fail during EMI/EMC testing.

We will be covering the following aspects during the course of the article:

What is crosstalk in a PCB?

Crosstalk is the disturbance caused by energy coupling from one PCB trace to another even if they are not in contact. It happens due to the interaction of electric (capacitive coupling) and magnetic fields (inductive coupling). The magnetic field generates mutual inductance, and the electric field generates mutual capacitance between the traces in the vicinity. Mutual inductance is responsible for inducing current on the adjacent (victim) line, which is opposite of the current in the aggressor line. And the capacitor formed due to mutual capacitance will pass the current in both directions on the victim line. 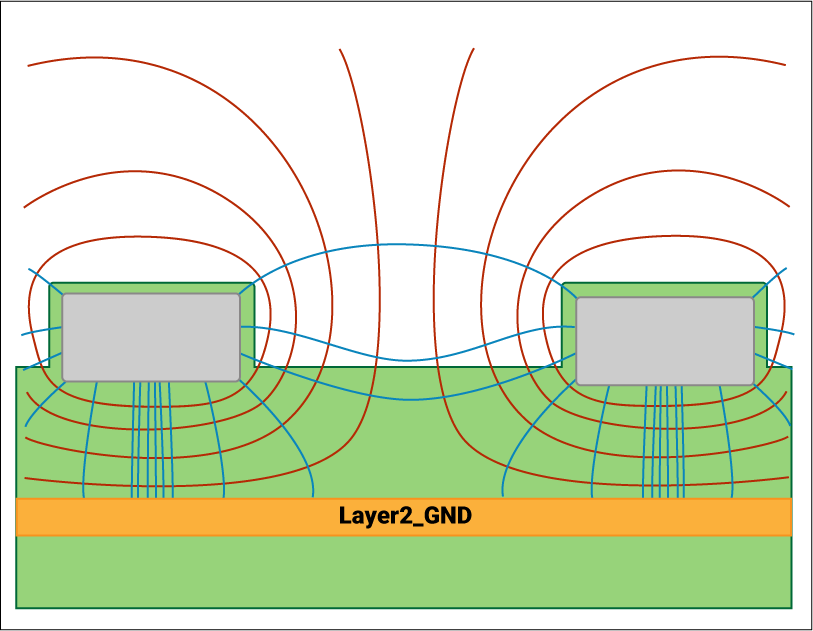 Crosstalk arises when two traces run next to each other in the same layer or one over the top of the other in adjacent layers. Consider two traces running in the same direction. If the signal flowing through one trace has a higher amplitude than the other, it could affect the signal flowing through the other trace. Here, the trace with a higher amplitude will be called “aggressor” and the other trace is referred to as “victim.”

In such a scenario, the signal in the victim trace will start imitating the characteristic impedance of the aggressor trace instead of conducting its own signal. When this happens, it means crosstalk has invaded the system.

How does crosstalk induce noise in a system?

Every electrical signal has a varied EM field. Whenever these fields overlay, they produce inductive, capacitive, or conductive coupling resulting in EMI.

Crosstalk induced noise due to mutual capacitance and inductance

Near and far-end crosstalk noise

Note: Crosstalk noise depends upon the termination of the victim line.

What are the different types of crosstalk?

Based on trace routing and location of the disturbance on the aggressor and victim lines, crosstalk can be classified as:

1. Capacitive crosstalk: It arises due to the traces that run on top or near to each other, producing a capacitive effect.

2. Inductive crosstalk: It generates due to magnetic field interaction between traces running parallelly over a long distance.

Forward and backward crosstalk depiction on a victim and aggressor line.

2.1 Near-end crosstalk (NEXT): It is measured at the transmitter end of the transmission line or a cable.

2.2 Far-end crosstalk (FEXT): It is measured at the receiver end of the transmission line or a cable.

NEXT and FEXT are measured with respect to the port to which the stimulus is applied. It can occur anywhere along a line, whether it is a dual conductor or single-ended. 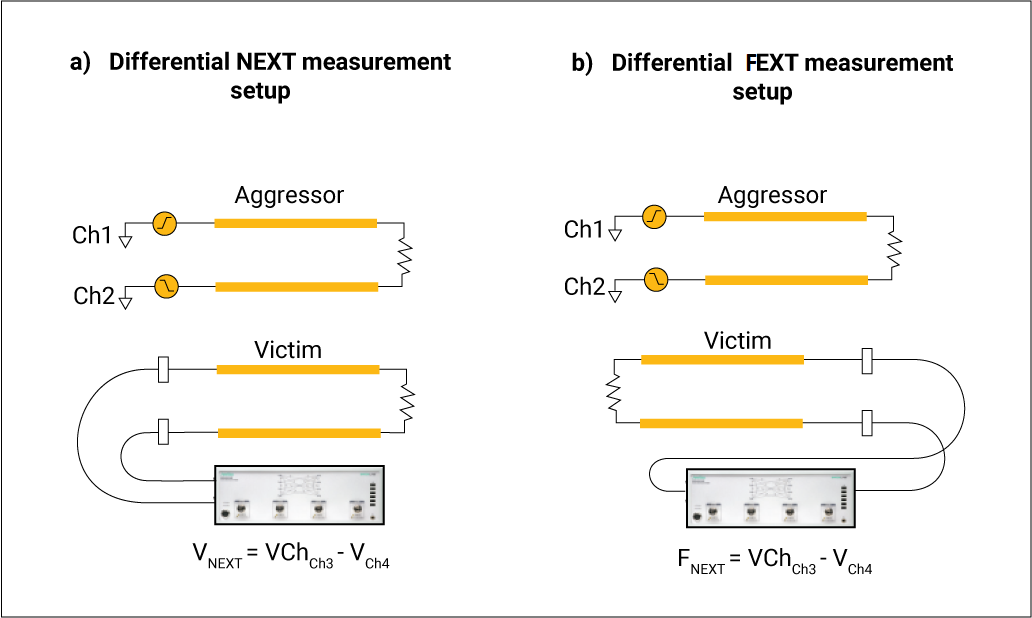 Differential NEXT and FEXT measurement

Note: The NEXT value is expressed in decibels (dB) and varies with the frequency of transmission. A higher dB of NEXT means less interference.

3. Power sum near-end crosstalk (PSNEXT): It is the sum of the NEXT of three aggressor pairs as it impacts the fourth victim pair. PSNEXT gives total crosstalks from all the adjacent pairs and involves measuring all pair-to-pair groupings relative to power.

4. Equal level far-end crosstalk (ELFEXT): It is the measurement of the FEXT that involves attenuation compensation.

5. Alien crosstalk: It gives the measurement of crosstalk in PCBs for telecom systems.

Above mentioned types are the ways of measuring or quantifying crosstalk in a system.

Crosstalk can also be measured using a TDR. For more details, read our post on how TDR impedance measurements work.

How is crosstalk measured?

Crosstalk is generally specified as a percentage of the signal that appears on the victim line, relative to the aggressor line. It can also be expressed in terms of dB below the driven line level. NEXT varies with the frequency of the transmission since higher frequencies create more interference. The higher the dB value, the less crosstalk is received by the disturbed link/channel. FEXT is calculated from the crosstalk elements of the system S-parameters.

The formula for crosstalk is given by:

K = A constant whose value always remains less than 1 and depends upon the rise time of the circuit and the length of the traces experiencing crosstalk.

H2 = It is the product of the height of the parallel traces.

D2 = It is the product of the direct distance between the centerline of the traces.

The above equation clearly shows that crosstalk can be minimized by reducing H and maximizing D.

Crosstalk in dB is given by:

Factors affecting the magnitude of crosstalk

How is crosstalk induced in a differential pair?

Crosstalk in a differential pair happens due to common mode current.

Whenever there is an imbalance in a differential system, the fields no longer completely cancel, which causes them to radiate in proportion to the imbalance. Similarly, external fields can induce currents in a differential pair that are not equal in amplitude and opposite in phase, so they no longer cancel. The resultant current is called common-mode current. Common mode crosstalk has more adverse effects on the system performance than the differential mode. 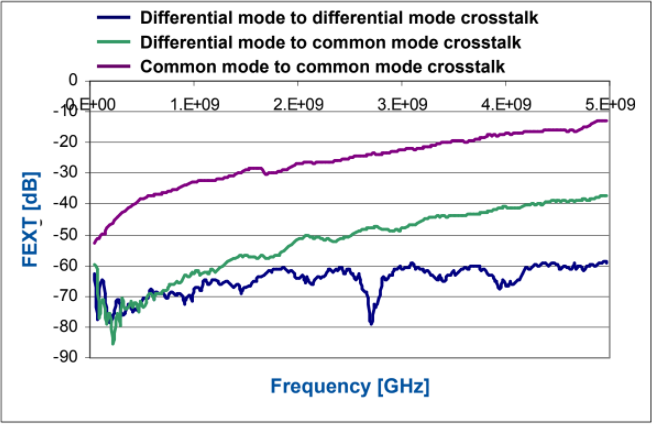 What are the causes for crosstalk?

How is it minimized?

T termination for even and odd mode transmission.

Electromagnetic fields on victim and aggressor lines interact with each other. In turn, they affect impedance and signals propagating on the transmission line. These two lines can be called a two-conductor system where two separate traces affect the propagation of the signals through them. Two propagation modes can be considered: even mode (both line in-phase) and odd mode (lines 180 degrees out of phase).

Since currents in both the lines are flowing in opposite directions, it will decrease the total inductance by mutual inductance (Lm) value.

Transmission line impedance for odd mode is given by:

Transmission line propagation delay for odd mode is given by:

In even mode transmission, the two lines (victim and aggressor) will always be of equal potential. This will reduce the effective capacitance by mutual capacitance value.

Field lines during even mode transmission.

Since currents in both the lines are flowing in the same direction, it will increase the total inductance by mutual inductance (Lm) value.

Current flow during even mode transmission.

Transmission line impedance for even mode is given by:

Transmission line propagation delay for even mode is given by:

Crosstalk cannot be reduced at the system level. Integrated modeling and characterization cycles can be used to mitigate crosstalk on device or package levels. If not controlled properly, it can turn your board into non-functional. Even though PCB designers ensure minimum separation between the traces, it may not be enough for associated issues.

To learn, check out how to avoid crosstalk in HDI substrate.

Let us know in the comments section if you want to learn something specific to signal integrity and transmission lines. We will be happy to resolve your queries.