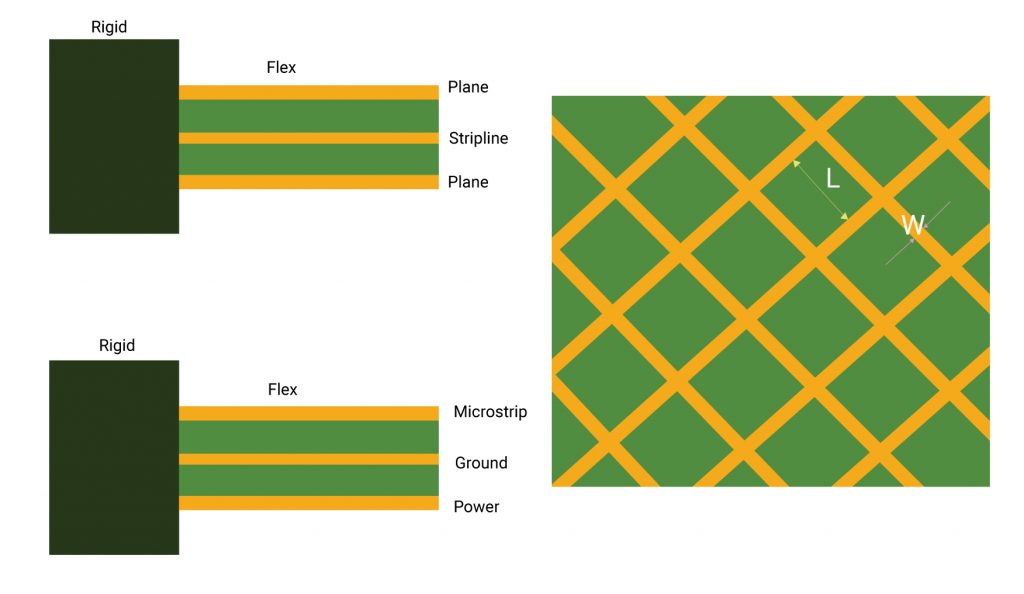 When do we need differential signaling?

Differential signaling is required when:

How to design flex boards to achieve differential signaling?

Differential signaling in flex circuits follows the design method of surface microstrip transmission lines. Surface microstrip lines are formed by etching one surface of a double-sided material. The top surface and the sides of the traces are exposed to air and are referenced to a power or ground plane.

Microstrip allows for thinner flexible PCB design (2 layers with a thin core), whereas stripline increases flex thickness considerably (3 layers with 2 thicker cores). A stripline PCB geometry is around 75% thicker than a microstrip design.

Shielding requirements are evaluated to determine which configuration will be suitable. In a nutshell, thinner controlled impedance trace widths support thinner copper and cores, resulting in improved flexibility and mechanical bend reliability.

To learn how to solve the electrical and mechanical reliability issues in rigid-flex designs, see air gap construction method in rigid-flex PCBs.

Why differential pair for a digital or an analog signal path?

What is cross hatch or mesh ground plane in flexible PCBs?

Cross-hatching is a technique that makes specific planes or big regions of copper on a PCB seem like a copper lattice. Regular apertures are spaced at fixed intervals as shown in the image below. Cross hatching a plane is no longer required in rigid PCBs, but it is still utilized in flex and rigid-flex designs, where it can give numerous advantages.

Actually, a cross hatched plane is created in a CAD or CAM system, where the hatched region is a filled area with a sequence of periodically spaced lines, similar to the traces plotted in signal layers. The region is then bordered by a thin trace that links the ends of the cross hatched lines. Connections to this cross hatching, such as power or ground connections, are established in the same way as they are in solid planes. The cross-hatch application in flexible PCBs is explained in the following sections.

It is advised to use a modeling tool that accounts for the missing copper in the cross hatched plane to determine the trace width needed for precise impedance. Since the impedance of a trace across the hatch ground zone is greater than that of the solid ground region, the inductance of the trace must be reduced to keep the impedance under control. This is the reason why a trace should be built a little wider. This lowers the inductance of the trace and raises the overall capacitance with respect to the hatch ground. Both techniques will adjust the impedance suitably.

Length of the interconnect

Repetitive variation of dielectric constant due to cross hatch

Cross hatch introduces shunt resonances in flexible PCBs, lowering the signal amplitude to an undesirable level and reducing the effective usable bandwidth of the circuit board. It happens because of the periodic variation in the dielectric of the cross hatch pattern and also because of variation in copper length.

Misalignment of the signal traces in differential pairs

Misalignment of the signal traces and cross-hatched layers generate impedance asymmetries and skew between the two signal traces in differential pair interconnects.

The return currents associated with the two neighboring interconnects interfere when the return plane is cross-hatch, resulting in crosstalk. When one or more traces are sandwiched between two traces on the same layer for cross-hatched boards, crosstalk becomes a significant problem. This has the potential to reduce signal quality substantially.

Switching the cross-hatched pattern orientation from vertical to horizontal is the best way to minimize crosstalk. 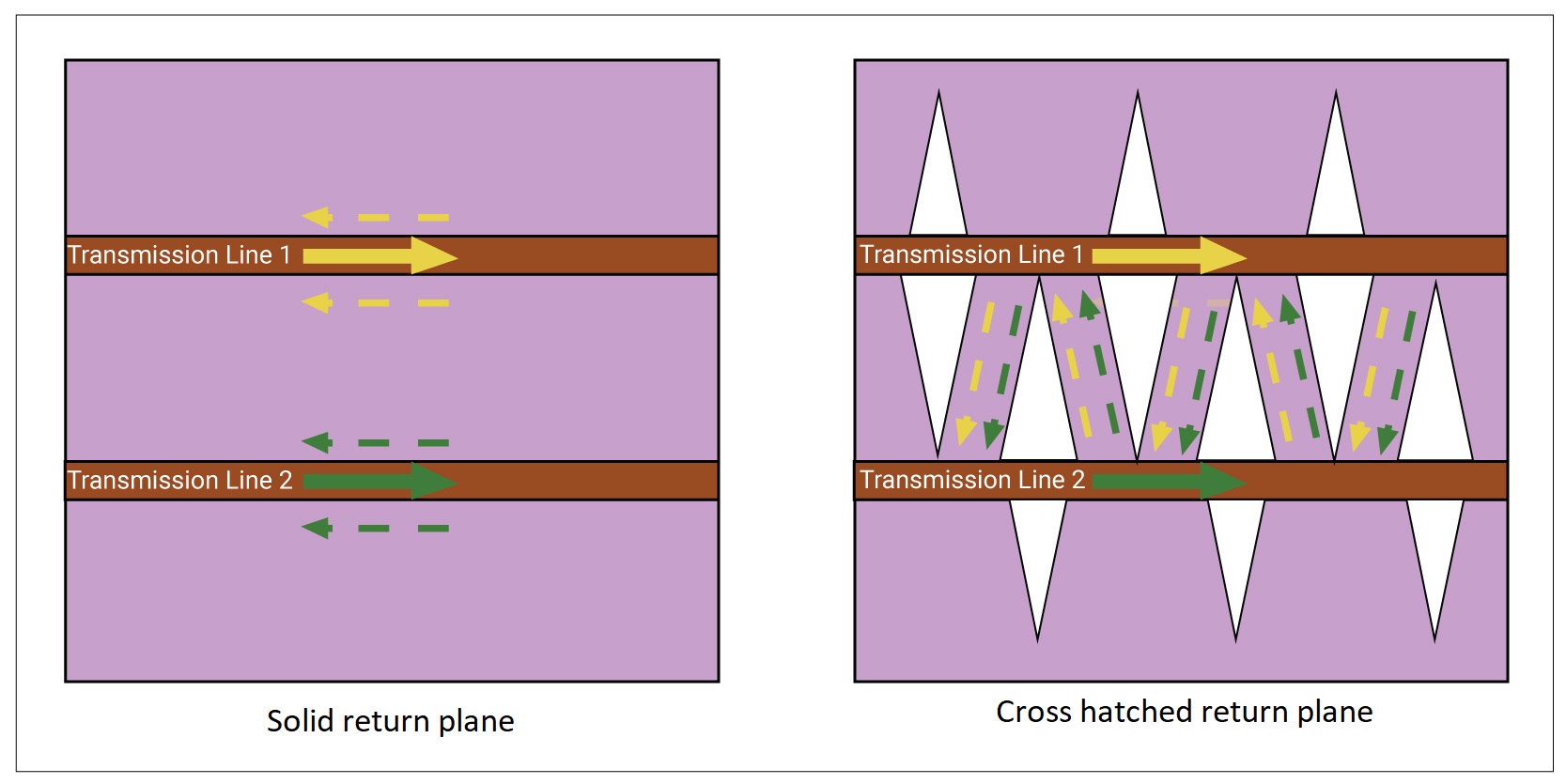 The return currents for each transmission line in the solid return plane flow in the opposite direction of the signal, ensuring that they do not interfere with one another. The currents traverse non-parallel return paths when the return plane is cross-hatched and when the electric and magnetic fields are not perpendicular (they are non-TEM). This results in signal distortion.

Although practically, it is not possible to make a cross-hatched return plane interconnect perform the same way a solid return plane does. Signal distortions can be reduced to acceptable levels by altering the size, shape, and orientation of the cross-hatched pattern in relation to the signal traces.

5. Implementing two or more cross-hatch intersections between each single-ended trace can reduce crosstalk.

8. Total transmission line length of less than 1 inch or 2.5cm causes less distortion than those with length more than 3 to 5 inches or 8 to 12cm.

How to maintain signal integrity using a mesh ground plane in flexible PCBs?

In flex and rigid-flex boards, hatching or meshed ground plane is a popular approach for providing a constant 0V reference. This results in a big conductor that can shield across a wide frequency range while enabling the flex ribbon to bend and fold without becoming too rigid.

Hatching works the same way as any other ground plane does. Its purpose is to offer a constant reference for designing a trace with the required impedance. In rigid-flex or flex boards with a meshed ground plane, any of the standard transmission line geometries (microstrip, stripline, or waveguides) can be used. At low frequencies, a hatched copper zone on the flex ribbon’s surface layer produces almost the same effects as solid copper.

The common configuration for stripline and microstrip routing on a flex ribbon with mesh ground planes is shown below.

L and W are the two important geometric parameters of the mesh plane construction. These two variables may be combined to provide a fill factor or the percentage of the mesh area to be filled by copper. The following are the results of changing these parameters:

What are the advantages and disadvantages of differential signaling?

Working with differential pairs is relatively more difficult than with single-ended connections. The difference is amplified in a flex circuit regime as it bends and has unusual angles. At the end of the day, we are just comparing two signals to check whether they’re in a HIGH or LOW logic state, and then moving on to the next one. Differential signaling in flex PCBs not only provides power saving but better noise cancellation as well.

Incorporating differential pairs is quite challenging in terms of designing but also offers benefits like impedance control and signal integrity improvements. Let us know in the comments section if you would like to read anything more on flex circuits. For a better understanding of flex designs, download our design guide. 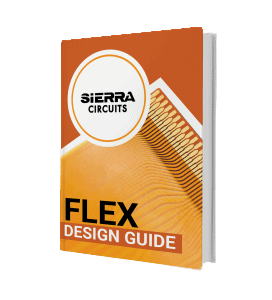 PCB Design Checklist to Build a Flawless Board