The Effects of High-Speed Signals in a PCB Design 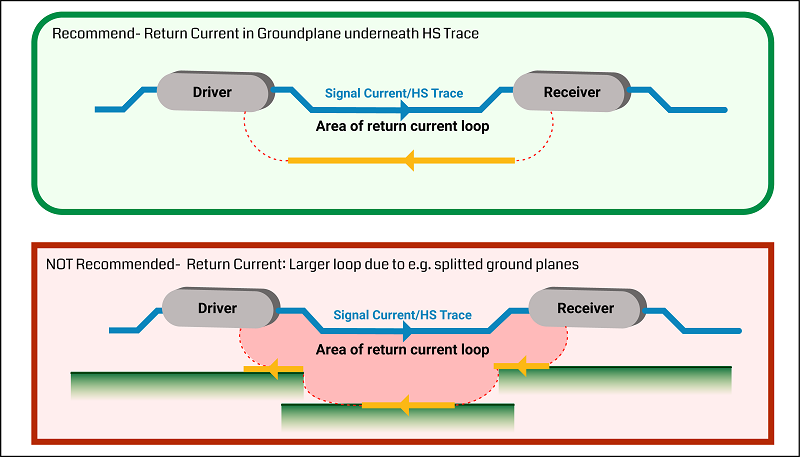 The designers are constantly challenged to improve the performance of an electronic product. At the same time, the designers need to consider the effects of high-speed signals in a PCB design since continuously increasing clock frequencies and decreasing rise times may lead to signal integrity issues. This requires higher frequencies to be used, and frequencies of 50MHz to 3GHz have become very common.

Designing high-speed PCBs is crucial to support real-world applications. Signal transmission problems are prominent when a PCB deals with high-speed signals. An excellent high-speed board is the one that integrates various components and routing while avoiding signal integrity issues. The three main challenges that we are facing in high-frequency boards are signal integrity, EMI/EMC, and dielectric loss.

In this blog post, we will be discussing the following factors that require attention while dealing with high-speed signals in a PCB design:

What is a high-speed signal in a PCB?

Signals with frequencies ranging from 50 MHz to as high as 3 GHz are considered high-speed signals such as clock signals. Ideally, a clock signal is a square wave, but it is practically impossible to change its ‘LOW’ level to ‘HIGH’ level (and vice versa) instantly. It has a specific rise and fall time due to which it appears to be a trapezoid in the time domain. It is worth noticing that the amplitude of the higher frequency harmonics of the clock signal in the frequency domain depends upon its rise and fall time. If the rise time is longer than the magnitude of the harmonics will become smaller.

Why is there always a signal distortion at high-frequency?

At low frequency (>1kHz), the signals remain within the data characterization limits, and the system performs as intended. When speed increases, the higher frequency impact comes at play, resulting in ringing, crosstalk, reflections, ground bounce, and impedance mismatch issues. It not only affects the digital properties of the system but the analog properties as well. These issues are more prone to increasing data rates for I/O interfaces and memory interfaces. Practically, these issues can be avoided by employing advanced PCB design services or by following strict layout guidelines. The signal routing, termination schemes, and power distribution techniques can help the designers to realize an effective PCB. 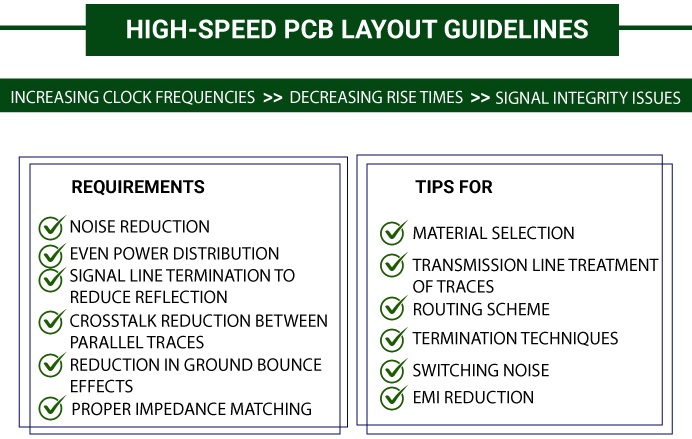 When do we need to take care of signal integrity in high-speed PCB design?

Signal integrity: Ideally, in a PCB, a signal should travel from a source (Tx) to a load (Rx) unimpaired/ unadulterated. But practically, it does not happen. The signal reaches the load with some losses (impedance mismatch, crosstalk, attenuation, reflection, switching issues). Signal integrity (SI) is the term defined to measure these signal distortions in the high-frequency regime. Signal integrity helps to predict and understand these critical issues by providing practical solutions.

PCB substrate: Substrate material used during the PCB construction contributes to signal integrity problems. Each PCB substrate has a different relative dielectric constant (εr) value. It determines the length at which the signal traces must be considered as transmission lines, and of course, in such scenarios, the designers need to take care of signal integrity threats.

Using εr value, designers can evaluate the velocity (Vp) at which the signal flows and propagation delay (tPD). These parameters help to determine the length at which the trace should be considered as a transmission line. The below-mentioned graph depicts how insertion loss increases with signal frequency. The insertion loss (per inch) is measured for FR-4 (glass epoxy) and high-frequency Rogers RO4350B material. Higher insertion loss may lead to more attenuation. Click here for more insight on PCB materials and laminates. 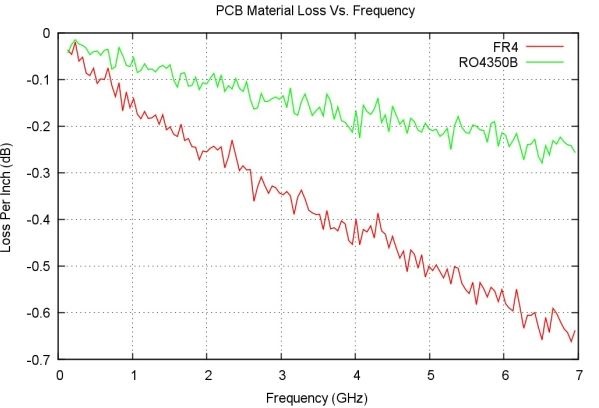 Use of Rogers in place of FR4 for a high-speed PCB. Image credit: EDN

Designers can implement the following design techniques in a high-speed PCB:

This parameter is important for faster and longer trace runs. The three factors that affect impedance control are substrate material, trace width, and height of the trace from the ground/power plane.

At low frequency, a PCB track is defined by its DC characteristics. It can be considered as an ideal circuit, devoid of resistance, capacitance, and inductance. When frequency rises, inductance and capacitance associated with the track start impacting its performance. Impedance mismatch in traces due to via stubs and imperfections in traces don’t allow the signal to be fully absorbed within the receiver (load); that’s why the extra energy is reflected towards the transmitter (source). This process repeats again and again until all the energy is absorbed. At high data rates, it causes signal overshoot, undershoot, and ringing, which generate signal errors. To solve this problem, these transmission lines are provided with ground planes underneath them and termination resistances. 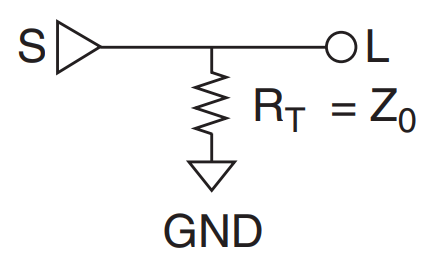 1.1.2 Thevenin termination scheme: It is an alternative to the parallel termination scheme, where the terminating resistor (RT) is split into two separate resistors, which is equal to the line impedance (when combined). This scheme reduces the total current draw from the source and adds current drawn from the power supply because the resistors are placed between VCC and ground. 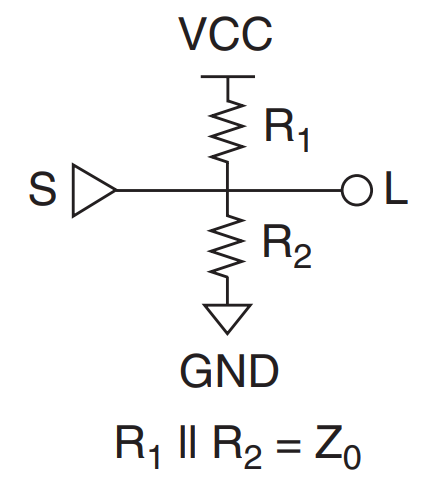 Thevenin termination in a high-speed PCB.

1.1.3 Active parallel termination: Here, the terminating resistor equal to the line impedance (Z0) is placed in the path of bias voltage. The bias voltage is arranged so that the output drivers can extract current from both high and low-level signals. This technique requires a separate voltage source that can sink and source currents to match the output transfer rates. 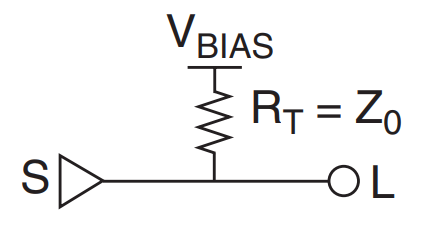 1.1.4 Series-RC parallel termination: In this scheme, the resistor and capacitor (>100pF) combination act as terminating impedance. Here, the terminating resistor (RT) is equal to Z0 and the capacitor blocks the low-frequency signal components and passes the high-frequency components. So, the DC loading effect of RT does not impact the driver. 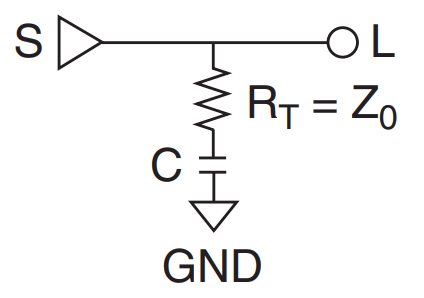 1.1.5 Series termination: It matches the impedance at the signal source instead of matching it at the load. This scheme helps attenuate secondary reflections. The line impedance varies depending on the distribution of the load. Therefore, a single resistor value does not apply to all conditions. This method requires only a single component at the source rather than multiple components at each load but delays the signal path by increasing the RC time constant.

Series termination in a high-speed PCB. 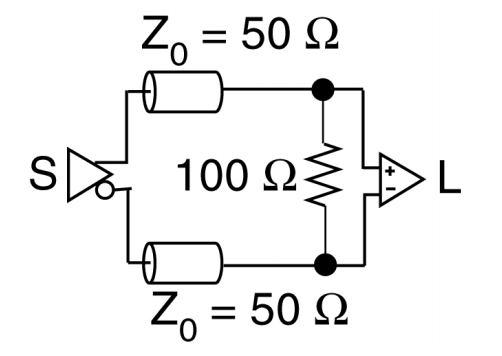 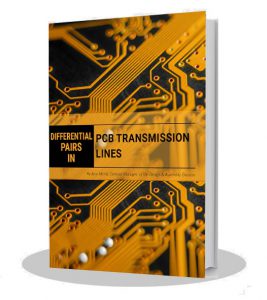 2.1 Dielectric absorption: The signal in the high-frequency medium causes the PCB dielectric material to absorb signal energy. It reduces the signal strength. It can only be controlled by choosing a perfect PCB material.

2.2 Skin effect: High-frequency signals are also responsible for generating waveforms with varying current values. Such signals have their self-inductance values, which initiate an increased inductive reactance at high frequencies. It is responsible for the reduction in the conductive area on the PCB surface, more resistance, and attenuation in the signal strength. The skin-effect can be reduced by increasing the track width but it is not feasible always.

Along with a careful selection of PCB insulator material and track layout, signal attenuation can also be reduced by including programmable differential output voltages, pre-emphasis, and receiver equalization. Increment in the differential output voltages helps to improve the signal at the receiver. Pre-emphasis is the way of only strengthening the high-frequency signal component by increasing the level of the first transmitted symbol. Receiver equalization circuitry attenuates the low-frequency signal components to cover the transmission line losses.

Being electronic industry enthusiasts, we all know when current, say signal, travels through a wire it generates magnetic fields around its vicinity. If two wires are nearby, then there is the possibility that the two magnetic fields will interact, causing energy cross-coupling between two signals called crosstalk. Prominently, inductive coupling (current induced by the magnetic field from source wire on the idle wire) and capacitive coupling (coupling of the electric field when the idle wire is exposed to the amount of current proportional to the rate of change of voltage in the source wire) are responsible for energy cross-coupling leading to crosstalk. 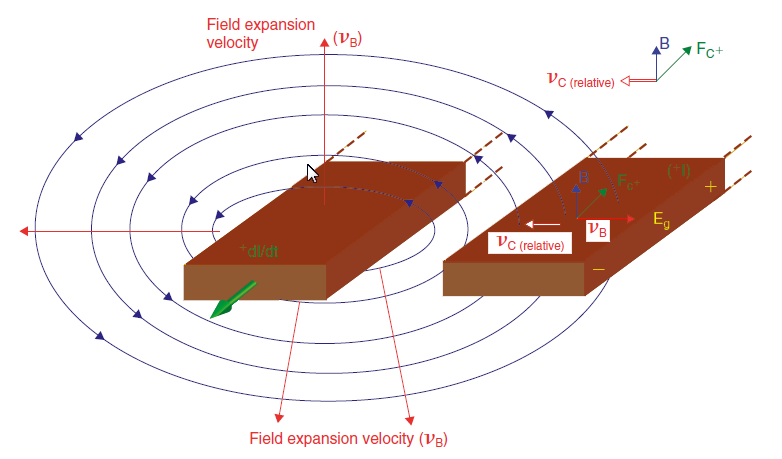 Note: The maximum crosstalk value is the difference between the expected voltage at the receiver and the receiver threshold.

Crosstalk can be prevented by separating the traces, by placing ground planes between the layers, and by using low dielectric material.

Traces separation can reduce crosstalk in a high-speed PCB. 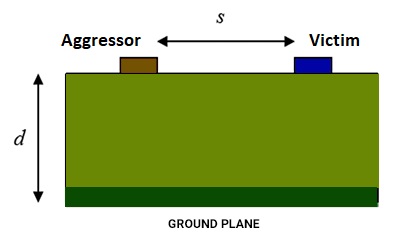 4. Impact of right-angle traces and vias in high-speed PCB design

Trace routing and vias location affect signal integrity by increasing reflections, crosstalk, and changing the impedance values. A trace having the right angle can cause more radiation since it increases the capacitance value in the corner region, resulting in a change of characteristic impedance followed by reflections.

Solution: Reflections can be minimized by replacing right-angle bend with two 45 degrees corners. To obtain a minimum impedance change, round-bend routing is the best. 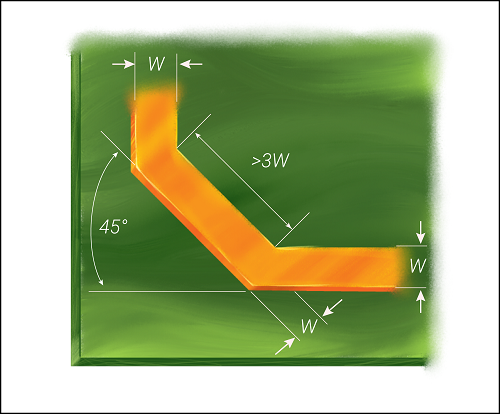 At corners, high-speed signals should be replaced by 45° bend.

5. Use of different routing techniques in high-speed PCB design

Unlike analog, digital circuitry requires fast on-off time since it works on switching between ‘0’ and ‘1’ and ‘1’ and ‘0’ signal levels. When speed increases, the switching period decreases. When several outputs switch simultaneously from ‘HIGH’ logic to ‘LOW’, the charges stored in the I/O load capacitances flow into the device. This current exits the device through the internal ground through pins that have impedance onto the ground. The switching current develops a voltage in this impedance. Thus, there is a voltage difference between the device and the board ground. This voltage difference is known as ground bounce. The ground bounce causes a ‘LOW’ output to be seen as ‘HIGH’ by other devices on the board. Ground bounce can be reduced by adopting solutions like:

While dealing with high-speed signals in a PCB, a designer should consider the following design considerations: 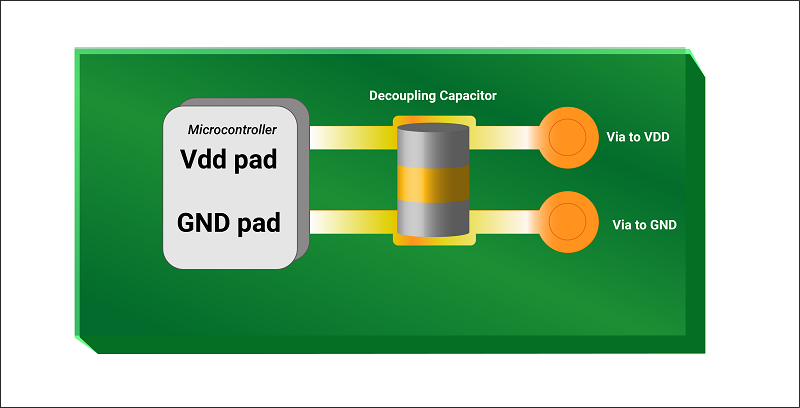 Power rail noise is reduced by placing the decoupling capacitors close to the IC power pins. 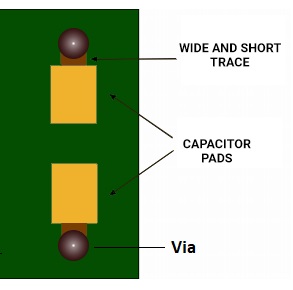 Ground bounce can be reduced by placing via close to the capacitor pad.

Also read: The Pros and Cons of Composite Amplifiers

PCBs also affect the EMI/EMC performance of the system. Auto-routed boards generally abide by the design rules (DRC) and do not meet the electromagnetic compatibility requirements. Such boards require fixes such as ferrites on cables and shielded enclosures. That’s why it’s always advised to ensure that components are properly placed and traces are optimally routed. It helps to realize products that fulfill all electromagnetic compatibility and signal integrity requirements on time within the given budget. Designing an electromagnetic-compatible PCB can improve the overall system’s performance. Learn more about PCB design guidelines for EMI and EMC.

Every PCB is susceptible to electromagnetic interference. It can be reduced through the following ways:

A short return path has a lower impedance, which gives better EMC performance.

Differentiate between high-speed and low-speed signals.

The most commonly used laminate material is FR-4. It is very cost-effective as long as the board frequencies kept in the range from 2.5 to 3 GHz. At high-speed, materials, like Rogers RO4350, have better properties than the FR-4. The only trade-off is cost. Non-FR-4 materials are expensive.

Why is it important to include design simulations and checks in high-speed PCB design?

In high-speed designs, signal integrity and EMC understanding and implementation during design play an important role.Signal integrity is all about identifying and eliminating factors responsible for degrading a signal’s quality when it travels through a medium from one point to another on a PCB. Signal integrity becomes very critical when a PCB operates at high-frequency since signal rise times are low. Adopting adequate termination schemes, attenuation control, crosstalk and ground bounce prevention can help the designers to realize a PCB that can work seamlessly at high-frequency. Additionally, an EMI-compliant design is also essential.