What Is the Difference Between Microstrip and Stripline in PCBs?

Signal reflections in PCB transmission lines can be avoided by matching the PCB trace impedance to the source. But it is also important to understand which impedance matching technique would be appropriate in design. I must tell you none of the transmission line techniques are perfect. The PCB design equations involving transmission lines are just approximations, accurate to varying degrees based on the specifications.

What is a microstrip line in a PCB?

The microstrip line is a planar transmission line that is used prominently in RF and microwave circuits. It is routed on the PCB surface and surrounded by two environments: PCB material and air. Microstrip consists of a strip conductor (land) on a dielectric substrate backed by a ground plane that radiates when the spacing between the ground plane and the strip increases.

What is the mode of propagation in a microstrip line?

In microstrip, the dominant mode of propagation is Quasi-TEM (Transverse Electromagnetic). Due to which the phase velocity, characteristic impedance, and field variation in the cross-section become frequency-dependent.

What is effective dielectric constant (ϵeff) in a microstrip?

The microstrip line is dispersive. As frequency increases, the effective dielectric constant also increases towards the substrate, resulting in the decrease of phase velocity. The effective dielectric constant considers that most of the electric fields remain within the substrate, but a certain fraction of the total energy exists within the air above the board.

ϵeff also varies with the free-space wavelength. The dispersion becomes more significant with the decreasing ratio of strip width to substrate thickness/width/height. Dispersion is less prominent as the strip width increases. In that case, the microstrip appears to be an ideal parallel plate capacitor. ϵeff should be greater than the dielectric constant of air (ϵr = 1) and less than that of the dielectric constant of the substrate. Read PCB Substrates: Knowing Your Dielectric Material’s Properties.

The challenging problem related to microstrip parameter calculations is that the conductor strip is not immersed in a single dielectric material. On one side, it is dielectric, and on the other side, it is usually air. The concept of effective dielectric constant is specially developed to address this challenge. The ϵeff represents some intermediate value between the relative dielectric constant of the board material (ϵr) and air (equivalent to 1). Hence, this can be used to compute microstrip parameters.

Characteristic impedance of a microstrip line

For a given PCB laminate and copper weight except for the width of the signal trace (W), the equation given below can be used to design a PCB trace to match the impedance required by the circuit. For the signal trace of width W and thickness T, separated by distance H from a ground (or power) plane by a PCB dielectric with dielectric constant ϵr, the characteristic impedance (Zo) is:

The characteristic impedance of the microstrip line changes with an increase in frequency. One point that is worth noticing here is, the IPC microstrip equation is most accurate between 50 and 100Ω, but is less accurate for lower/higher impedances.

Note: All dimensions are in mils.

Characteristic capacitance of a microstrip line

Where T is the board thickness and H is the separation between traces.

Delay constant of a microstrip line

Advantages of a microstrip structure

Losses in a microstrip line

Note: Despite microstrip’s low cost and compact size advantages, it is lossier than a coaxial line, waveguide, CPW, and stripline.

How to reduce losses in a microstrip line?

It can be done by suspending the substrate over the air. Suspension of microstrip means that the separation between the signal and ground paths increases, which also enhances microstrip’s tendency to radiate, specifically at the discontinuities.

How does suspension help with loss reduction in a microstrip?

The air between the bottom of the substrate and the ground plane contains the electromagnetic field. The insertion loss of the microstrip reduces because air essentially has no dielectric loss compared to standard circuit board substrates. Additionally, the width of the microstrip line increases due to the lower effective dielectric constant. Wider lines have lower current density, and thus, lower ohmic loss. The microstrip suspension technique is used only up to a few GHz.

Microstrip geometry is used to conduct the EM waves at low frequency, but beyond 60GHz, its application is restricted due to the losses. This is the reason they cannot be used at THz frequency.

A multi-layer microstrip line can be designed on different configurations of substrate layers. It could be single, double, or multi-layered material. With the need for SoC requirement, the use of multi-layered substrate has increased at high frequency.

What is a stripline in a PCB? 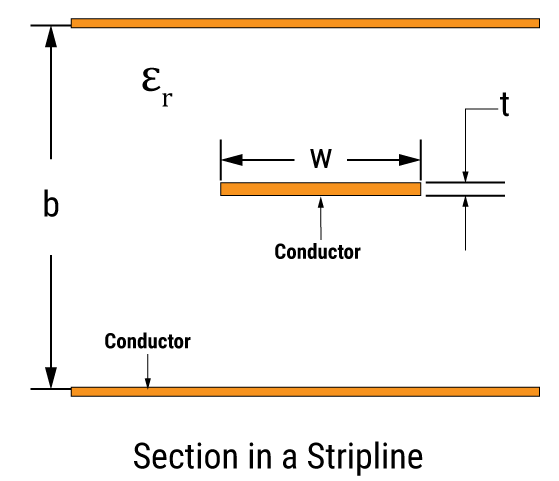 Stripline is routed on the inner layers of a PCB, and that is why it is surrounded by only one environment, i.e., PCB material. This technique is preferably used in a multi-layer PCB design, and the signal trace is backed by the ground planes above and below.

Characteristic impedance of a stripline

Note: b is the spacing between two planes and We is the effective strip width.

Characteristic capacitance of a stripline

The propagation delay (tpd) for a given length in stripline is only a function of the dielectric εr.

The electric ‘E’ and the magnetic ‘H’ field lines for the fundamental TEM mode in stripline are indicated above in a defined cross-section and a defined time.

Advantages of a stripline arrangement

Limitations of a stripline arrangement

What are the losses in a stripline?

Designing a multi-layer board with stripline geometry

Stripline is often required for multi-layer circuit boards because it can be routed between the layers but grounding the stripline requires due attention. If the top and bottom ground planes are not at the same potential, a parallel-plate mode can propagate between them. If excited, this mode will not remain confined to the region near the strip but will be able to propagate wherever the two ground planes exist.

Stripline is more insensitive than microstrip to lateral ground planes of a metallic enclosure since the electromagnetic field is strongly contained near the center conductor and the top-bottom ground planes.

What will happen if the top and bottom ground planes are not at the same potential?

If vias are placed too close to the stripline edge, they may intervene with the characteristic impedance. So, the via spacing should be a minimum of 3 strip width.

So, is it possible to design a multi-layer PCB without using a stripline arrangement?

The embedded trace can be replaced by a double two-layer PCB design, i.e., four copper layers in total.

Here, the signal traces of both outer layers are easily accessible for measurement and troubleshooting purposes. But this arrangement does not take advantage of the shielding properties of the planes leading to greater emissions and sensitivity towards external signals.

The arrangement given on the right side of the above image uses the embedded traces and does take full advantage of the planes. The choice between embedded and non-embedded arrangements for PCB designing can be made selectively based on what is important for you. Ease of testing or reduced EMI and EMC.

Apart from manufacturing and dielectric differences, PCB microstrip and stripline designs have routing differences as well. 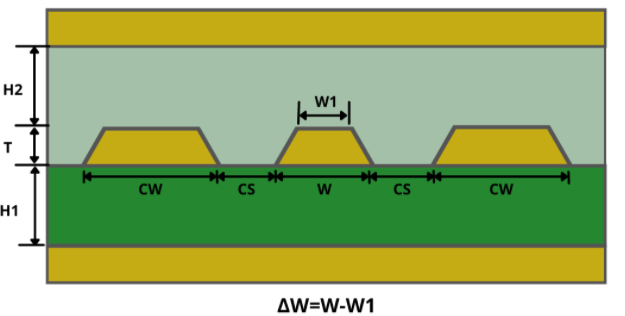 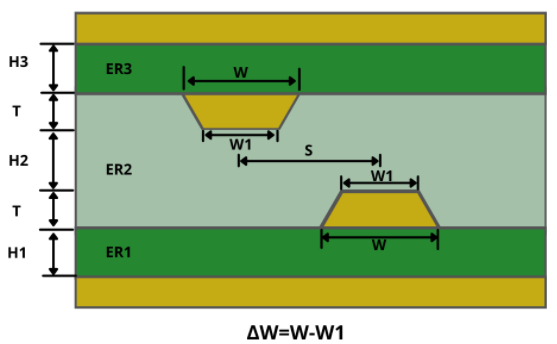 Impact of surface finish and copper roughness on conductor loss

Dielectric constant and guided wavelength of microstrip and stripline designs

Dielectric constant (how electrically dense is the material to vacuum) and loss tangent (how lossy is the material) are two critical parameters required for application-specific PCB trace design.

If the dielectric constant is higher, then the guided wavelength will be shorter. That is why the same length mismatch between two traces causes more propagation delay. Considering this fact, it is advisable to use a material with a low dielectric constant.

For stripline, the guided wavelength is:

For microstrip, the guided wavelength is:

It is quite important to accurately design stripline and microstrip transmission lines to achieve appropriate impedance matching and/or pulse delay time. Understanding the fundamentals of microstrip and stripline routing help PCB designers in applying these indigenous circuit technologies to their designs.