Impedance impacts how signals propagate through the board, how power is exchanged between components, and how signals leak into undesired sections of a PCB. There are several methods for determining a circuit’s impedance, but they don’t necessarily yield realistic results unless you include the appropriate parasitic elements in your models. 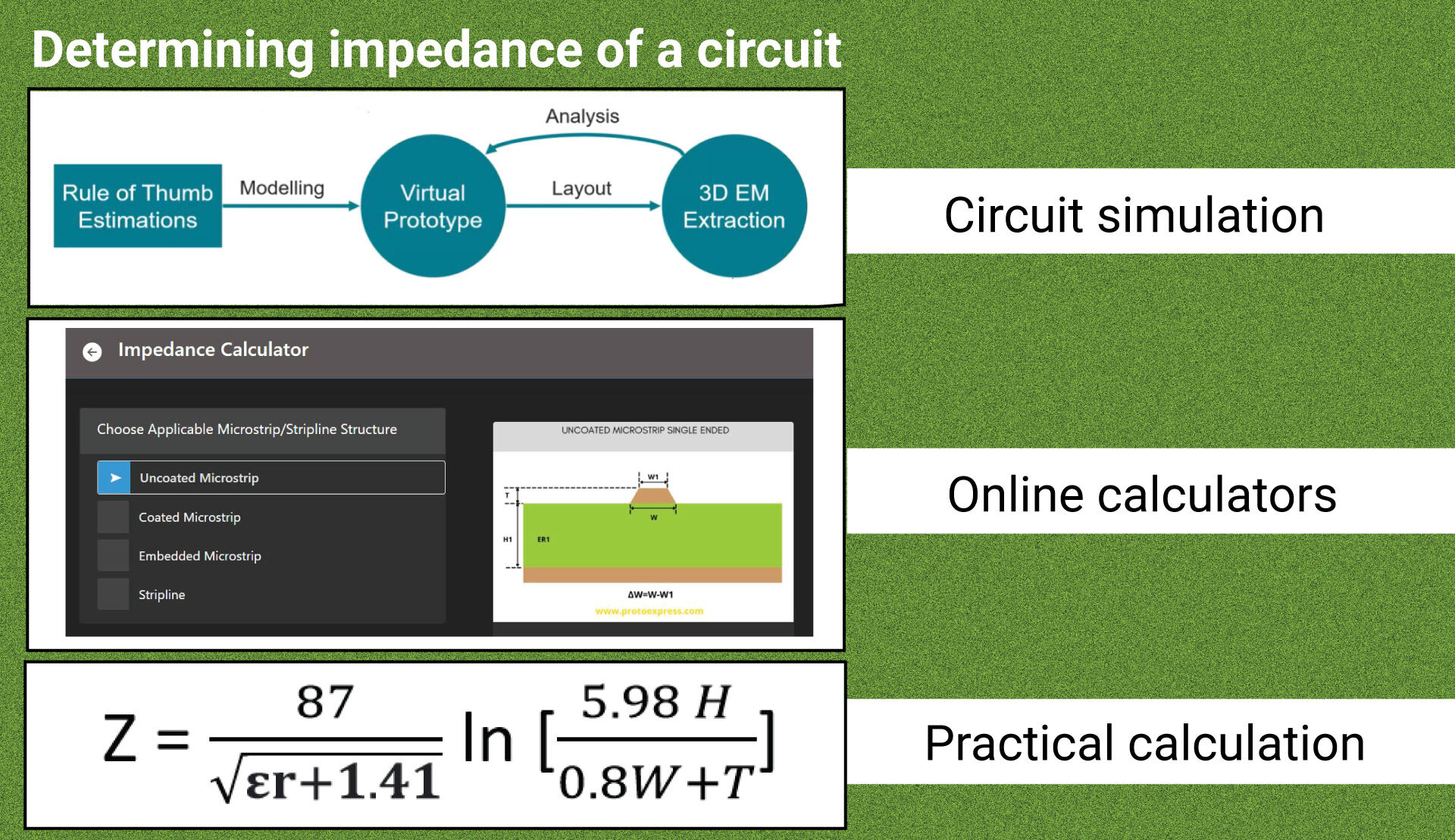 Impedance impacts how signals propagate through the board, how power is exchanged between components, and how signals leak into undesired sections of a PCB. There are several methods for determining a circuit’s impedance, but they don’t necessarily yield realistic results unless you include the appropriate parasitic elements in your models.

Impedance of a circuit

Impedance is an AC characteristic of a circuit that may vary with the operating frequency. It is normally represented by Z = R – j/ωC + jωL where ω= 2πf.

What is the difference between impedance and resistance?

Some of the key differences are tabulated below:

Why is impedance matching important in PCB?

The impedance of a trace is determined by physical dimensions of the trace (trace width and thickness), dielectric constant, and distance to reference plane (dielectric thickness) of the board material. It ranges between 25 and 125 Ohms. The following factors impact the impedance of PCBA:

Controlled impedance is a must for high-speed applications such as signal processors, telecommunication, and RF transmission.

What determines the overall impedance of a circuit board?

The impedance of a circuit is determined by the arrangement of the components. Resistors, capacitors, and inductors are some of the basic circuit elements. Resistors oppose the flow of current and the resistance value is independent of the supply frequency. Whereas, capacitors and inductors offer reactance which is a function of the frequency of the input signal. In an ideal world, the capacitor should have reactance inversely proportional to the signal’s angular frequency. Inductors should offer reactance that is directly proportional to the signal’s angular frequency.

Apart from the parameters mentioned above, the impedance of a circuit depends on the PCB substrate and the inner conductive planes. The insulator along with the interior layers creates parasitic capacitance and inductance. These parasitic elements result in cross-talk and affect the overall impedance of the circuit. Now we will see a few factors that impedance depends on.

The characteristic impedance of a trace

Odd mode is the impedance of a transmission line when two traces in a pair are operated differentially (signals with the same amplitude and opposite polarity).

Even mode is the impedance of a transmission line when two traces in a pair are operated evenly (signals with the same amplitude and direction).

Transmission line impedance also depends on how traces are arranged relative to each other. Two traces that are placed close to each other experience inductive and capacitive coupling. This coupling normally results in cross-talk and also changes the impedance on each line.

To understand how to reduce the impedance mismatch on a PCB trace, see how to limit impedance discontinuity and signal reflection in PCB transmission lines.

At lower frequencies, the power delivery network will have capacitive impedance, lowering the resistance of the power bus that drives the components and current return path. The physical separation between power rails, traces, and internal planes defines PDN impedance. As the input frequency rises, so does the PDN impedance. 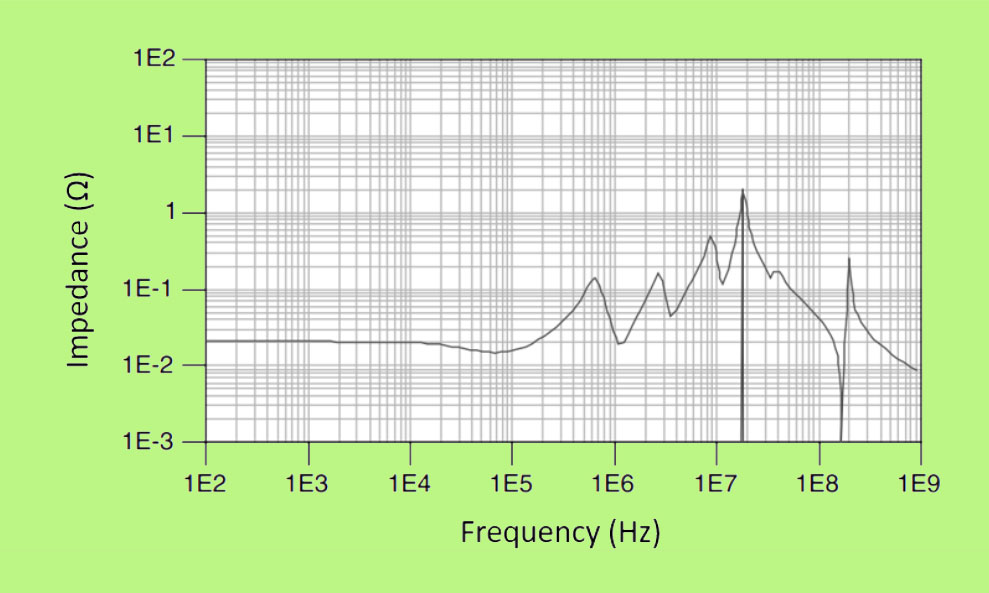 Impedance spectrum is useful for determining a bandwidth with the lowest power delivery network impedance. It should remain flat across the board’s operational range. To maintain the power integrity of the board, the placement of the ground plane is crucial. When traveling towards the ground plane, signals will take the path with the least reactance. The path with the least reactance should be directly beneath conductors on the board. This will ensure that the circuits have the least amount of loop inductance and are less susceptible to EMI.

Board material selection and stack-up

Stack-up is an arrangement of board materials in sequential order. The image above depicts a 4-layer stack-up. L1 and L4 are the outer layers, L2 and L3 are the inner layers. As mentioned earlier, the neighboring conducting layers in a board build-up create a parasitic effect that impacts the overall impedance of the circuit. Impedance mismatch caused by parasitics will produce reflections on the trace, eventually introducing cross-talk and EMI issues.

Stack-up also acts as documentation that expresses your expectations to the manufacturers.  A missing piece of information might make it difficult or impossible for fabricators to understand exactly what the requirements are.

Choosing the right material that best suits the design is the key to avoiding these circumstances. Dielectric constant (Dk) affects the geometry of a trace with a specific impedance value. Resin content and material thickness are the two critical components that determine the Dk of a material. It decreases as the thickness increases. That means the higher the resin content, the lower is the Dk value.

Below pointers will help PCB designers to select the appropriate materials and avoid variations in overall impedance value.

Vias and through holes in a multilayer board will have parasitics between neighboring conductive elements. The inductance of a via will be in the order of nanohenries and is mostly determined by its aspect ratio. The impedance of vias is generally around 25 to 35 Ohms. Hence, there is a significant difference between impedances of vias and traces (around 50 ohms). When a via hole is placed on conductive traces, noise coupling occurs and causes impedance discontinuities. Always avoid placing vias between the differential pairs to reduce the discontinuities.

Methods to determine the impedance of a circuit

The impedance of a circuit can be calculated using the following methods.

Circuit simulation is a technique used to verify the functionality of a board design before manufacturing. Impedance calculation is now included in many PCB design software programs. One of the main advantages here is that the impedance design parameters can be modified to perform various simulations. Once the simulations are carried out, you can choose the best design to manufacture.

Controlled impedance or trace parameters can be determined using online calculators. Although not as detailed as simulation tools, these can get you close enough to where only minimal adjustments by your contract manufacturer (CM) are required for manufacturability.

Sierra Circuits Impedance Calculator employs a 2D numerical solution of Maxwell’s equations for PCB transmission lines. It produces data that are fairly accurate and suitable for circuit board manufacture. The tool estimates trace parameters such as capacitance, inductance, propagation delay per unit length, and the effective dielectric constant of the structure.

Unlike our impedance tool, most of the free online impedance calculators aren’t very accurate because they’re based on empirical formulas and don’t account for the trapezoidal shape of the trace or the effect of numerous dielectric materials.

Follow the below steps to quickly arrive at an approximate controlled impedance value.

Calculate rise time for the trace using the formula,

tr = 0.35 / fmax where fmax is the maximum operating frequency.

The characteristic impedance of the trace can be calculated using the below formula:

Regardless of how you determine the impedance of the circuit board, you should collaborate with your contract manufacture (CM) as DFM standards and material availability will affect the production of your board. Let us know in the comments section if you need any assistance with your controlled impedance design. We would be happy to help you. Check our controlled impedance capabilities to learn more about our services.