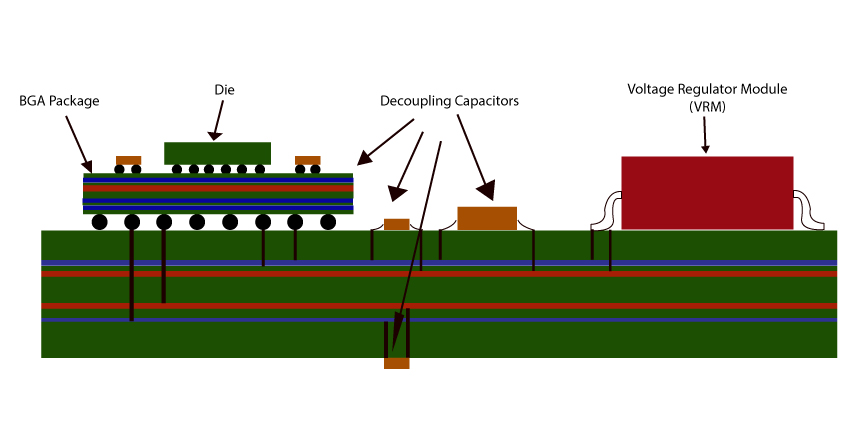 The continual silicon scaling has caused EM to become an increasing design factor in systems that depend on current generation ICs. Power plane noise is a significant source of signal integrity issues. The technological advances have succeeded in integrating over a billion transistors on a single chip. But the scaling of transistors has led to problems related to power distribution network (PDN). Power integrity is an important attribute in the next-gen high-speed digital designs. Not just for high power application-specific integrated circuits (ASICS), even clocks and SerDes are sensitive to µV of noise. On the other hand, high-speed logic gates can create high-frequency noise using just a few transistors.

The speed of signals between ICs off-chip has steadily increased well above 112Gbps. The silicon industry is developing a technology that will aid a speed greater than 1Tbps between ICs. For instance, in 2.5D and 3D integration, the ICs are segmented. The communication between them is through interposers or the ICs are stacked on one another utilizing silicon vias.

The speed of communication between ICs determines the speed of the system. Hence the interconnection and packages play a vital role in deciding the performance of the overall system.

What do you mean by high-speed signals?

Many designers consider signals that are 50MHz and above as high-speed. It depends on the edge speed – rise and fall time of a signal.  We can generate 10GHz noise with a 1kHz repetition rate of our TDR generator.  It is all about edge speed. In other words, the frequency of a signal above which a PCB can significantly degrade circuit performance is termed as high speed. The PCB design process that takes into account the speed of the signal is defined as a high speed or complex board. For example, motherboards, routers, and smartphones.

It is something that tends to obscure a signal that we are hoping to see. The unwanted signal is defined as noise. Anything that we don’t want in a signal is termed as noise. 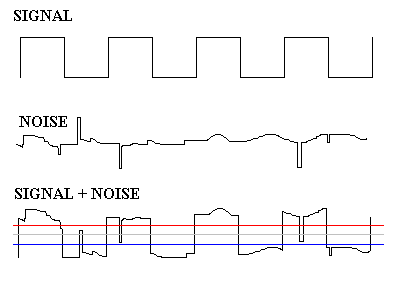 Power distribution networks are usually associated with parasitics. The parasitics we are talking about here are resistance and inductance. Each time the circuit switches these parasitics generate noise between Vdd and ground nodes of the transistor level circuit. This is referred to as power supply noise. This noise propagates through the traces and it picks up reflections and cross talk along its way. When the signal reaches the receiver, it will consist of the originally intended signal with noise and cross-talk embedded in it. Designers should set a noise budget so that you have a predefined level of noise that can be tolerated in the circuit.

What is power integrity?

In the electronics industry, power integrity is the analysis of how effectively power is converted and delivered from the source to the load within a system. Noise is generated at both ends (the source and the load). The VRM contributes noise as does the “load” and of course, anything else on the board can also contribute noise via crosstalk. Design for power integrity is nothing but managing the power supply noise. Managing the power supply noise across the voltage and ground terminals of the transistors, so that they function at high speed is called design for power integrity.

A power distribution system consists of a power supply, a load, and interconnect lines (transmission lines).

The design of the power and ground distribution networks has become a challenging task with the miniaturization on integrated circuits. These challenges arise from shorter transition times, lower noise margins, higher currents, and increased current densities. In addition to this, the power supply voltage has decreased in order to lower dynamic power dissipation. The increase in the number of transistors surges the total current drawn from the power delivery network. Simultaneously, the higher switching speed of these transistors produces faster and larger current transients in the power distribution network.

The fluctuations in the supply voltages are referred to as power supply noise. The power distribution noise at the terminals of the load should be maintained within the maximum allowed voltage fluctuations to ensure the correct operation of the overall system. The power distribution system should be carefully designed, supplying sufficient current to each transistor.

The power is delivered through a power distribution network which consists of passive components and interconnects from source to load.

PDN deals with the power and ground that are implemented throughout a design. It consists of several sub-systems like IC, package, and PCB. The IC PDN will have the fastest operating frequencies and signal switching, whereas, the PCB PDN will have slower signalling.

If only the direct current (DC) is taken into consideration, then ohm’s (P = I2R) will assist in reducing the power dissipation. As it is difficult to reduce the operating voltage and the required current, we can focus on reducing the resistance. As a result, this will reduce the power dissipation. But since we are utilizing alternating current (AC current) we must consider the frequency range. Hence, rather than resistance (R), impedance (Z) must be taken into consideration during the design process. In AC analysis, much like DC/resistance, lowering the impedance as low as feasible is the goal for reducing the anomalies.

The power supply noise is a transient phenomenon that occurs due to the rapid switching of transistors. The design of PDN is best accomplished in the frequency domain. It is optimized to meet the target impedance value.

The objective of the design process is to ensure that the PDN response never exceeds the target impedance over the frequency bandwidth of interest. However, Xilinx allows 5% for operational voltage range, but only 10mV for noise since the noise gets into the PLL.

There are two kinds of circuits to be considered while working with high-level design.

The transistor-level circuits that communicate within a die.

Here the communication is between transistors located on two different dies.

What is target impedance?

Impedance is a function of resistance, capacitance, and inductance and varies over frequency. The target impedance is defined by ohm’s law.

This ZT is a frequency-dependent parameter since the current drawn Imax can also change as a function of frequency.

As discussed in the earlier section, the goal is to lower the impedance to a feasible value while designing a PDN. Lowering impedance requires a target impedance and determining where the anti-resonance occurs.

What are decoupling capacitors?

Decoupling capacitors are quite frequently implemented to reduce the impedance of a power distribution network and provide the required charge to the switching circuits, lowering the power supply noise.

Two distinct goals that these capacitors serve are:

What’s the difference between signal integrity and power integrity?

Signal integrity and power integrity are closely related to each other but are also two independent things.

Signal integrity (SI) is the measurement of the quality of an electrical signal typically in an electronic printed circuit board. A stream of binary values is represented by a voltage (or current) waveform in a digital system. But in a practical sense, digital signals are fundamentally analog in nature, and all signals are subject to effects such as noise, distortion, and loss.

How to measure power integrity?

Another tool used by designers is the HyperLynx – Power Integrity tool.

This tool identifies potential power integrity distribution issues and predicts what can interfere with board design logic. The tool helps in analyzing the board at an earlier stage of the design cycle and gives an idea of how your circuits will behave.

HyperLynx is integrated with Mentor’s Xpedition and PADS Professional flows and also works with all major PCB layout systems.

Both in a package and a printed circuit board, interconnects are always routed in the presence of voltage and ground planes. Any discontinuities in the current return path will cause an issue with the speed of the traversing signal.

Unless you comprehend the current loops in your system and the discontinuities associated with it, it is hard to predict the return path discontinuities and their effect on the signal integrity of the waveform. 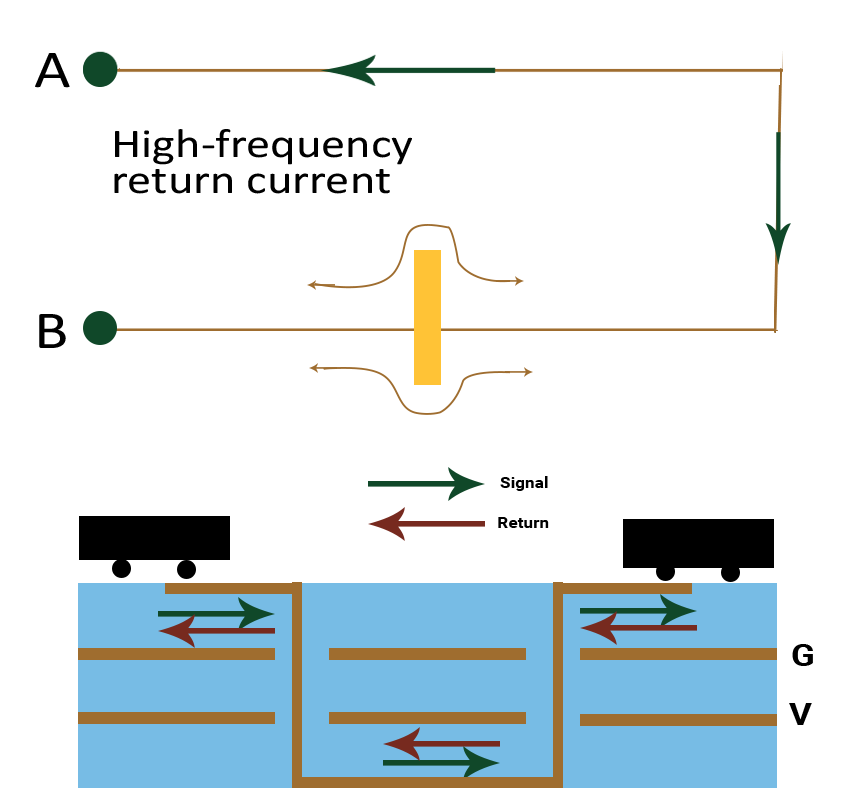 The return path discontinuities (at via locations) are either mitigated by capacitors or by stitching the planes together using vias considering the planes are at the same DC potential. This design approach provides the necessary continuity for the return currents and improves the channel response. Decoupling capacitors reduce the jitter. Embedded decoupling capacitors and thin dielectrics are now commercially available for improving signal and power integrity.

With the increasing complexity of PCBs and packages, managing PI and SI is quite challenging. Implementing more and more decoupling capacitors in PCBs and packages isn’t the right solution.

We would like to thank Steve Sandler for sharing his insights and making this article more informative.

Not only is Steve the founder and CEO of Picotest but he is also THE rock star in the field of power integrity. He has been involved with power system engineering for nearly 40 years. He frequently lectures and leads workshops internationally on the topics of power, PDN, and distributed systems and is a Keysight certified expert for EDA software. Just in case you didn’t know that already…

If you require high fidelity testing and measurement tools for power-related applications, you will find everything you need on the Picotest website.

We are happy to have a power integrity expert by our side. Thank you, Steve!

PerfectPulse Is the Pocket-Sized TDR Every Engineer Needs