Decoupling is a way of isolating signal components from composite signals based on frequency. Therefore, understanding which range of frequencies should be isolated is important for accurate decoupling capacitor placement in a system. 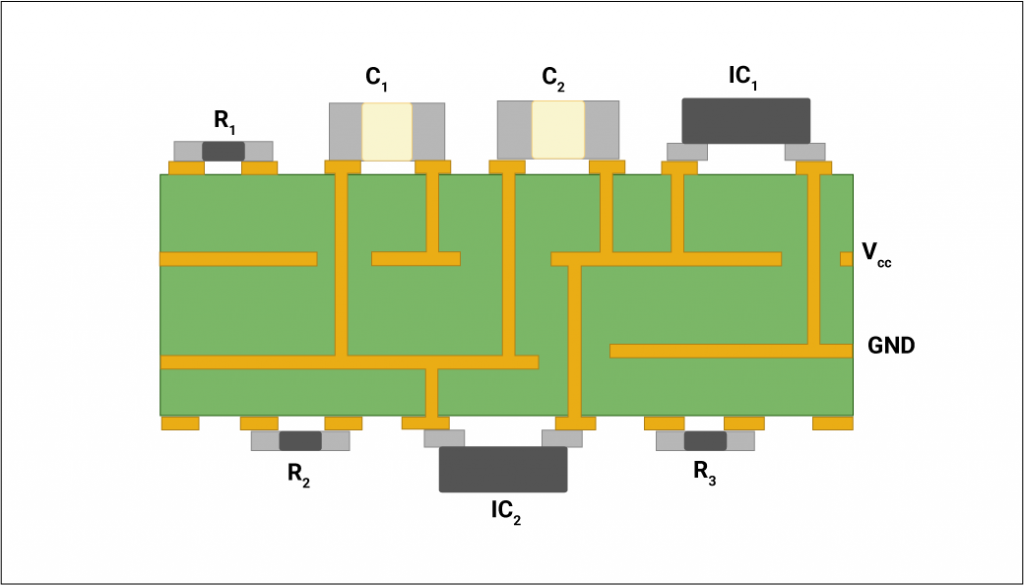 Decoupling is a way of isolating signal components from composite signals based on frequency. Therefore, understanding which range of frequencies should be isolated is important for accurate decoupling capacitor placement in a system.

The separation of AC and DC signals is vital for PCB assemblies or else it will impact both signal integrity and power integrity. Poor decoupling also results in power bus noise, leads to EMC issues, and affects the product reliability.

Decoupling capacitors are used for power supply and transient decoupling because of their intrinsic energy storage capability. Complex PCB assemblies have multiple power supplies that require voltage regulation to ensure the proper operation of components such as processors, FPGAs, ICs, or amplifiers. These capacitors supply current to maintain voltage levels of the components when needed. Effective decoupling depends upon the capacitor type and its placement on the board.

In this article, we have discussed some important decoupling capacitor placement guidelines that will reduce the adverse effects on the power distribution network (PDN) and I/O signals.

When an active device on a PCB shows a sudden change in the amount of current it draws, it causes a drop in the supply voltage across the connection trace impedance. This voltage drop impacts the functioning of all the devices on the board, not just the switching device. If the voltage drop is too high, the circuits on the PCB may fail to operate properly. The voltage fluctuations on the power bus generate conducted or radiated electromagnetic interference (EMI) problems.

The voltage fluctuation can be controlled by placing a capacitor between the power and ground conductors near the active devices. This capacitor acts as a local charge reservoir that controls sudden changes in the current while balancing the voltage on the power bus.

PCBs can be segregated into three categories for power bus decoupling:

Boards that do not have power planes

Decoupling capacitor placement is easier for boards that do not have a power plane. This is significantly true if the PCB has one or more solid ground planes. When power is distributed on traces, designers find it challenging to control the power bus noise seen by each device.

The optimum isolation between the active devices on the board allows the designer to decouple each device individually. It ensures that the device’s high-frequency current requests are fulfilled without permitting unacceptable voltage swings at the power input pins. Here are some guidelines for decoupling capacitor placement on PCBs that do not have power planes:

Placing decoupling capacitors on a PCB having closely-spaced power planes requires a different approach. It is because the planes contribute a decoupling capacitance (due to their close proximity) that becomes significant at high frequencies.

Where should decoupling capacitors be placed for signal and power integrity?

This is how BGA will be fanned out with a via that is on the pad. Later, it can be filled with a conductive or non-conductive filling.

This will allow capacitors to fit directly underneath the part and minimize the inductance when compared to placing the capacitors outside the footprint area.

Note: It’s a good idea to limit the number of power balls shared with one via.

When placing the bypass capacitors within the matrix, try to do so only when there are existing vias available as a part of the BGA fanout pattern. Adding extra vias in these areas is possible. But be aware that extra vias will also reduce the copper channels on the internal power and ground planes due to the fanout pattern being in four directions.

This method creates a channel around the middle block of ground pins by enabling bypass capacitors placement on the bottom side of the board. To achieve this, it may be required to reduce the size of some of the power capacitors. As a result, a large number of bypass capacitors are placed significantly closer to the power pins.

Where should bypass capacitors be placed on a PCB?

The placement of capacitors is one of the most critical phases of the PCB design process. Incorrect capacitor placement can completely revoke their performance.

As shown in the above figure, the bypass capacitor takes up extra space on the top side and, hence reduces the available space for vias. As shown in the figure given below, since the capacitor is placed on the opposite side, it can be placed underneath the pads of the IC on the top. So, there is no via space loss.

The method shown above is the preferred way among PCB engineers. It not only provides more via space but also has the advantage of keeping the ground path shorter by connecting the ground side of the capacitor directly to one of the device’s ground pins. This provides a shorter, less inductive ground system around the IC.

The lowest value capacitor provides switching current for the maximum frequency supply current requirement. When the output of a digital device changes from an ‘OFF’ state to an ‘ON’ state and vice-versa, the current required to do this becomes quite high for a short period of time. If the only capacitors available to produce this near-instantaneous current are larger-value capacitors then the output will not be able to switch at the desired speed due to the longer time constant of capacitors. This can cause serious timing problems in the design.

Connecting low-value capacitors close to the pin enables the supply of small current rapidly to the switching device. This is due to the fact that these capacitors have a shorter time constant. The current requirement is reduced once the output returns to a steady condition.

In the figure shown below, the capacitor with the lowest value (C13) is put closest to the device power pin, followed by C2, and C14. The tantalum can be placed above or below the device as long as it is close to U1 and will not affect the performance.

The space to the left and right of an IC is generally used for fanouts or other components that need attention before the tantalum. As the capacitance value increases, the number of capacitors of each value normally decreases. There could be four to six ceramic capacitors for one tantalum capacitor. Capacitors larger than 10uF can normally be distributed across a larger region.

If the design only allows for two bypass capacitors, then place one on either side of the device.

To avoid ground bounce problems (because many outputs switch simultaneously), add two more capacitors per device, as shown below.

Capacitors are the most versatile components from the PCB assembly stand-point, and decoupling is one of their chief functions. In fact, the board’s signal and power integrity may potentially depend on how effectively decoupling capacitor placement is done.