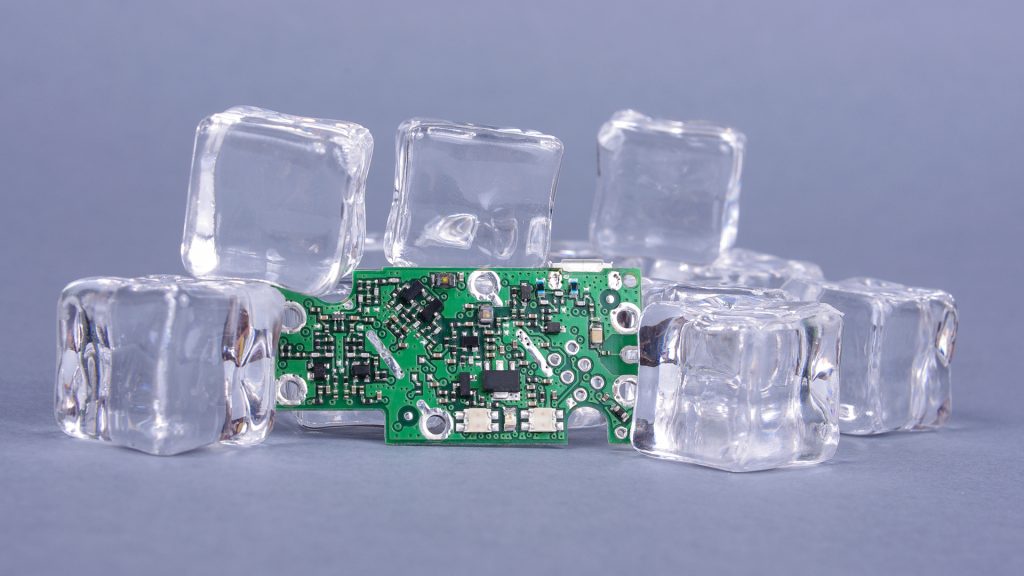 Modern electronics use high-power components like high-performance processors, MOSFETs, high-power LEDs, IGBTs, etc. We know there is a trend in electronic industries to make these components smaller but this results in the creation of thermal hotspots. High temperatures at PCB thermal hotspots could result in device failure. Hence PCB thermal management techniques must be carried out in PCBs.

Thermal performance is one of the most critical factors to consider while designing electronic products. To combat heating issues, PCB designers need to incorporate techniques that reduce the impact of heating. It means that designers need to learn the cooling methods used in electronic devices and need to know techniques to reduce heat dissipation internally.

In this blog post, we will discuss the following topics:

What are PCB thermal management and thermal modeling?

Thermal modeling is a critical tool that is used to conduct thermal failure analysis. It gives designers a good understanding of various thermal issues associated with their circuit design. Also, it helps in choosing proper cooling methods and PCB design techniques.

Here we have mentioned several PCB thermal management techniques to reduce heating in your PCB.

To fabricate a thermally stable PCB, thermal effects must be studied during the designing phase itself. The first step in thermal design is to identify the hotspots. Thermal modeling or thermal simulation techniques are used to find hotspots. Also, current flow analysis must be done along with it, because high-current traces cause heat generation.

Copper thickness and width of traces

The thickness and width of the copper pad or traces play a significant role in PCB thermal design. Copper trace thickness should be adequate to provide a low impedance path for current passing through it. This is because the resistance of copper traces and vias accounts for significant power loss and heat generation particularly when they bear high current density. Therefore sufficient trace width and thickness are recommended to reduce heat generation.

Placing of high-power components in PCB

For better heat dissipation, high-power components such as processors and microcontrollers should be placed at the center of the PCB. If a high-power component is mounted near the edge of the board, it will accumulate heat at the edge and raise the local temperature. But if the device is placed at the center of the board, heat will scatter over the surface in all directions. Thus the surface temperature of the PCB would be lower and dissipates easily.

Thermal vias are the simplest way to dissipate heat in circuit boards. Before moving on, let’s learn about thermal resistance. Thermal resistance is a quantification term for the obstacle that resists the flow of heat through a conductor. It is equal to the difference in temperature between two points on a closed surface divided by the total heat flow. 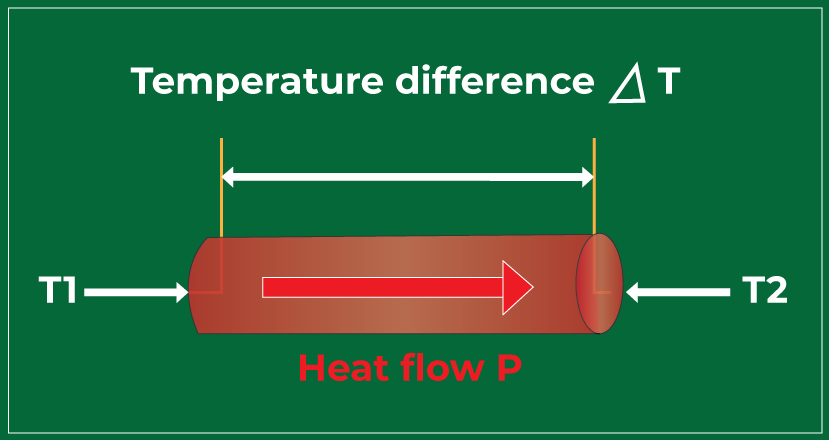 From the above equation, we can conclude that the higher the resistance is, the tougher the heat flow as well as dissipation. Thicker materials have lower resistance than thinner ones. Hence, thicker PCB materials with lower resistance can dissipate more heat. 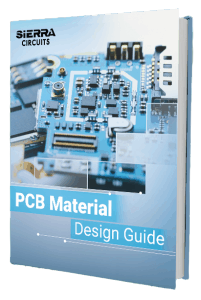 To increase the dissipation rate, thermal vias are a good choice. They are heat-conducting metallic barrels that provide a low thermal resistance path from the top copper to the bottom surface of a circuit board. These vias are incorporated just below the heated components to facilitate the dissipation process using the conduction method.

There is no perfect method to design a thermal via. However, the general structure of a thermal via is described below.

Locating thermal vias and arranging them is critical. The thermal conductivity of these vias is higher than that of FR4.

You must be aware that every via possesses inductance. The interesting fact is, if the vias are parallelly arranged and connected to the ground plane, the return path of the lowest inductance can be achieved, provided the bottom conductor of heated components is grounded. Hence, assimilate thermal vias in PCBs as much as possible. These will establish low thermal resistance and quicken the heat transfer process. The number of thermal vias under power ICs and processors should be determined by the designers considering the heat dissipation range and surface area.

If your budget does not allow you to add more vias, increase the lengths for a given diameter or opt for wider vias.

Benefits of thermal vias in PCBs

The heat sink is a cooling method that transfers dissipated heat from PCB components into a cooling medium. Heat sink works on the principle of conduction which states that heat transfers from an area of high thermal resistance to an area of low thermal resistance. The heat also flows from high-temperature areas to low-temperature areas and the amount of heat flow is directly proportional to the temperature difference. The heat sink draws heat away from the PCB to fins that provide a larger surface area for faster heat dissipation.

Heat pipes are cooling devices recommended for higher temperatures applications such as in rockets, satellites, and avionics. The heat pipes are mostly available in a hollow cylindrical shape, but they can be made into any shape conveniently.

Heat dissipated from various devices is transferred to the liquid inside the heat pipe and vaporizes the liquid. The vaporized liquid condensate at the condenser end and returns to the evaporator through the wick structure by capillary action. This cyclic process ensures the dissipated heat to flow away from the PCB.

Designers should consider a heat pipe that entirely covers their heat source and should be able to bend as per your design requirements. There is a wide range of heat pipe working fluids available, from cryogens to liquid metals. Working fluid selection depends on the temperature range of the circuit and the fluid’s chemical compatibility with the container and the wick of the heat pipe.

For smaller devices, cooling methods like a heat sink, heat pipes, cooling fans are not an option at all. In such cases, the only option is to increase the thermal conductivity of the board and spread the generated heat. Thick boards with a comparatively larger surface area can dissipate heat quickly.

The thermal conductivity of a PCB is determined based on the coefficient of thermal expansion (CTE) of the materials used and its thickness. Designers must give extra attention to choosing material for each layer in the PCB stackup. When the coefficient of thermal expansion of the various materials used in different layers is mismatched, upon repetitive thermal cycling, fatigue occurs to reduce the thermal conductivity. Copper plating in vias and solder balls are more vulnerable to damage under high thermal cycling.

Integrated cooling methods are used to achieve higher coefficients of heat conductivity compared to a traditional heatsink & fan setups. The concept is to blow a cooling agent through dedicated vias directly to the bottom of the processors or BGAs or any heating components.

The number of vias should be determined by the designer, depending on the thermal criteria of the mounted component. A single via is considered first, more can be added on-demand which depends on the velocity of the cooling fluid, and the surface area of the component.

There are also other kinds of integrated cooling methods, for example, the inboard cooling method illustrated above. In this method, a heat exchanger is incorporated inside the board itself. Since no external heat sink or cold plate is required, the PCB assembly steps and the weight of the final product is reduced. But these coolers require a very high thermal via density around the cooling channels.

We have gone through several cooling methods in this article, like heatsinks, heat pipes, thermal vias in PCB, etc. All these techniques exchange heat through conduction, which in many cases is not enough. The cooling fan uses convective heat transferring method that offers the designer a much efficient method for getting the heat away from components.

The efficiency of the fan depends on the ability to push a specific volume of air from the device and the compatibility of placing a fan. Designers must consider things like friction, size, noise, cost, operation, power requirement, etc while selecting the fan. But the fan’s primary purpose is to push a volume of air, which means capacity is the superior factor in choosing a cooling fan.

The soldering thickness of device joints should be even and ambient to reduce heat accumulation on the component leads. Extra care should be given while soldering near vias. There is a chance for the solder to overfill the hole leading to bumps on the bottom of the board and this reduces the contact area of the heat sink.

PCB designers have two options to avoid the overflow of solder. The first one is to decrease the diameter of the via below 0.3mm. The smaller the vias, the surface tension of the liquid solder inside the via is better able to counter the force of gravity on the solder.

The second option is the process called tenting. It involves covering the pad of the via with a solder mask to prevent the solder from flowing down to the via.

Time to upgrade to advanced techniques in PCB cooling. Thermoelectric cooling or Peltier heat pump methods use the Peltier effect for cooling. Peltier effect is the reverse of the generation of thermal steam. These devices can cool components to sub-ambient temperatures.

TECs are used where the component temperature should be kept at a particular level. For example CCD cameras (charge-coupled devices), laser diodes, microprocessors, night-vision systems, etc. TECs offer accurate temperature control and faster response. Designers can use a combination of TECs with air cooling or liquid cooling techniques to extend the conventional air cooling limits for high-power dissipating processors. Commercial Peltier pumps cover a range of ceramic face sizes from 3.2 × 3.2mm² to 62 × 62mm² at the cooling side, from 3.8 × 3.8mm² to 62 × 62mm² at the base (heated side).

Also read: What is Thermal Profiling in PCB Assembly

Designers can use a combination of some or all of the above heat transfer techniques and guidelines on thermal vias in PCB. The easiest way to increase the efficiency of a component is to reduce the amount of heat dissipated in the first place. But irrespective of how much success you achieve in using cooling methods, you can always improve the reliability of your design by reducing the heat dissipation in your board. Do you have more tips on PCB thermal management?