When the temperature of a PCB assembly starts rising, the owner of that board begins to sweat profusely. Clearly, they feel the heat more than the components on the board do. Jokes apart, don’t lose your cool, metal cores are here for you. 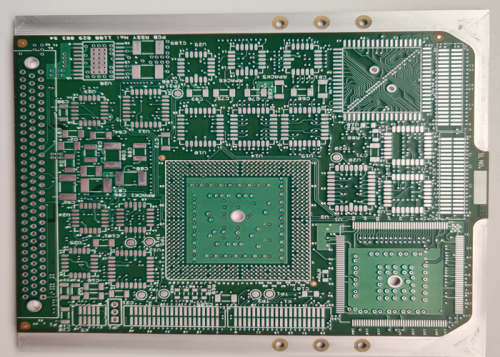 When the temperature of a PCB assembly starts rising, the owner of that board begins to sweat profusely. Clearly, they feel the heat more than the components on the board do. Jokes apart, don’t lose your cool, metal cores are here for you. Metal core PCBs are used where high amounts of heat are generated in the circuit and therefore the heat needs to be dissipated quickly to avoid damage to the components.

The rapid development of the LED industry, especially in high-power LED lighting, has raised concerns about heat dissipation. These LEDs are usually mounted on PCBs and thus can create problems within the circuit. Without the right technique, heat dissipation will hinder the performance of electronic devices that run on high-power. The implementation of metal cores in these kinds of applications proves to solve this problem.

What is a metal core PCB?

A metal core printed circuit board (MCPCB) also known as thermal PCB, incorporates a metal material as its base as opposed to the traditional FR4, for the heat spreader fragment of the board. Heat builds up due to some electronic components during the operation of the board. The purpose of the metal is to divert this heat away from critical board components and towards less crucial areas such as the metal heatsink backing or metallic core. Hence, these PCBs are apt for thermal management.

In a multilayer MCPCB, the layers will be evenly distributed on each side of the metal core. For instance, in a 12-layer board, the metal core will be at the center with 6 layers on the top and 6 layers at the bottom.

MCPCBs are also referred to as insulated metallic substrate (IMS), insulated metal PCBs (IMPCB), thermal clad PCBs, and metal-clad PCBs. In this article, we will be using the abbreviation MCPCB to avoid ambiguity.

The MCPCBs are made up of thermal insulating layers, metal plates, and metal copper foil.

The basic structure of MCPCB comprises of the following:

Accumulation of too much heat in printed circuit boards lead to malfunctions in the devices. Electronic devices that generate a considerable amount of heat cannot always be cooled using conventional fans. Conductive cooling through metal core boards is an ideal option. In conductive cooling, the heat is transferred from one hot part to a cooler part by direct contact. This works well since heat constantly seeks to move to any object or medium that is cooler.

MCPCBs are most widely found in LED lighting technologies. Some of the popular applications are:

Here, the thickness of the core ranges between 40 mils and 120 mils, with 40 mils and 60 mils being the most commonly used. Characteristics of the MCPCB with Aluminum substrate are as given below:

Various base metals and their properties

The thermal conductivity of the metal core PCB dielectric material is measured in Watts per meter Kelvin (W/mK).

These boards possess the ability to integrate a dielectric polymer layer with high thermal conductivity for lower thermal resistance.

In a typical single-sided LED MCPCB, the circuitry layer of copper foil is bonded to a layer of thermally conductive dielectric material. This dielectric layer is further bonded to a thicker layer of metal which can be either Aluminum 5052 (5052H32), Aluminum 6061 (6061T6), or Copper C1100.

Thickness of the dielectric layer and the metal core

The core is made up of a metal plate of a particular thickness that dissipates heat. The thickness is in the range of 30 mils to 125 mils. The copper foil thickness is around 1oz. to 10oz.

The metal core or the metal backing plate is the thickest material in the board. The most frequently used thicknesses are 1mm, 1.5mm, and 3.2mm. The metal layer offers rigidity, maintains the circuit flat, and provides sufficient thickness so that it’s compatible with the mounting hardware implemented on standard boards. The exposed metal plate side of the board isn’t coated with a surface finish or solder mask.

Plated through holes in MCPCB

A major factor to keep in mind during the design process of an MCPCB is to minimize the use of plated through-hole components. Instead, implement SMT components. Since the bottom layer is a metal, PTH or NPTH with conductive component leads inserted to it will lead to a short. If PTHs are implemented, then do remember to isolate the metal from the through-hole. To achieve this, the metal core is drilled approximately 40 mils to 50 mils larger than the plated through-hole. Later, these holes are filled with non-conductive epoxy filler and then pressed.

After pressing the metal core, the remaining filler compounds are removed from the surface. Following this, the boards are prepared for the lamination with the inner layer cores. Right after lamination, the plated through holes are drilled and the rest of the process follows as per the standard manufacturing protocol.

Unlike the standard LED PCBs which require vias under the components for heat dissipation, the MCPCBs eliminate the necessity of these kinds of vias since the metal core performs the heat dissipation. Hence, this makes the work easier for the manufacturers as the drilling process is kept minimal. After this process, if it’s a 1-layer MCPCB, the electroless plating process is bypassed and proceeds straight to circuit imaging. Hereafter, the metal core boards follow the same procedure that a standard FR4 board would follow.

The stack-up should be symmetrical on either side of the metal core in a multilayer board. To elaborate, the number of layers on top of the core should be equal to the layers on the bottom. Similar to any other standard printed circuit boards, the copper symmetry is also preferred. The symmetry is maintained to evade warpage issues.

Metal core boards transfer heat 8 to 9 times faster than FR4 PCBs. These metal core laminates keep the heat-generating components cooler by dissipating heat at a faster rate. The dielectric material is kept as thin as possible so that it creates the shortest path from the heat source to the metal backing plate. This assists in quicker heat dissipation. The dielectric material thickness will usually be in the range of 0.003” to 0.006”.

Since we are talking about heat dissipation a lot here, allow me to explain the difference between heat sinks and heat spreaders for you.

Here, the basic idea is to dissipate heat from the heat-generating components, like the processors, to the surrounding air medium.

Basically, there are two kinds of heat sinks: passive and active. The passive heat sinks have no moving parts whereas the active ones do. When the volume of heat is too much to dissipate then the active heat sinks are used. Here, the system is cooled by forcing air or other fluids through it.

With the rising demand for printed circuit boards that are of high power and high component density, thermal management plays a crucial role in the reliability of these boards. The implementation of metal cores can greatly assist in thermal management. However, thermal management depends on some factors such as the amount of heat generated by components, the environment, the design, and the enclosure.

The PCB designers should analyze everything that influences the temperature right from the concept stage. Don’t sweat, think ahead and implement the right substrate for your PCBs.