A PCB transmission line comprises at least two conductors – one for the signal and another for its return path. Complex circuit board nets are the combinations of such simpler transmission line structures. Understanding these structures (microstrip, stripline, and coplanar) can be fruitful from the PCB design point of view, for the designer as well as the fabricator. 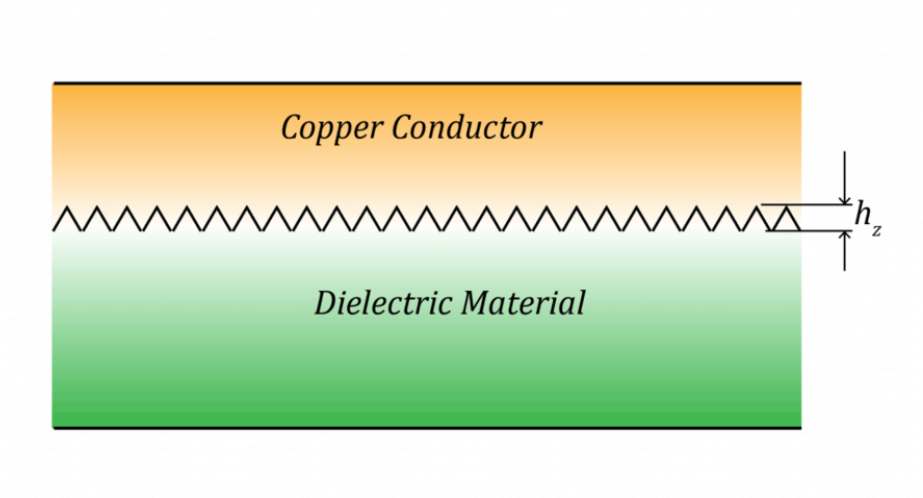 A PCB transmission line comprises at least two conductors – one for the signal and another for its return path. Complex circuit board nets are the combinations of such simpler transmission line structures. Understanding these structures (microstrip, stripline, and coplanar) can be fruitful from the PCB design point of view, for the designer as well as the fabricator.

What are the losses in a transmission line?

The effect of leakage loss can be ignored because PCBs have very high volume resistance. Radiation loss is the energy lost from the circuit due to RF radiation. This loss is dependent on frequency, dielectric constant (Dk), and thickness. For a particular transmission line, the loss will be much higher at higher frequencies. For the same circuit when using a thinner substrate with a higher Dk value, the radiation loss would be less.

In this post, we will only be discussing the transmission line losses related to the conductor loss (αc) due to signal trace resistance and the dielectric loss (αd) due to PCB dielectric which is measured in terms of loss tangent/dissipation factor.

In our previous PCB Transmission Line series, we gave you the characteristic impedance (it is the impedance seen by the signal, independent of the frequency) of a transmission line:

For a sinusoidal signal of frequency f (ω = 2πf) traveling in the direction over the line, expressions for voltage and current at various points and time are given by:

Where α and β are the real and imaginary components of

, which is given by:

This represents a wave that travels with a propagation delay

per unit length and which is attenuating as it travels along the line.

The signal attenuation factor of a transmission line of length l is:

The attenuation or signal loss factor is usually expressed in dBs.

Thus the dB loss is directly proportional to the line length. Hence, we can express the above as dB loss per unit length as:

We usually omit the minus sign, keeping in mind that it is a dB loss – always to be subtracted from the signal strength in dB.

The above is also called total insertion loss per unit length of the transmission line and written as:

Where R is the resistance of conductors per inch.

Now there are two conductors in a PCB transmission line – the signal trace and the return path.

It is possible to approximate:

Does the entire cross-sectional area of the signal trace participate in the signal current equally? The answer is: not always – it depends on the frequency of the signal.

At very low frequencies – until about 1MHz, we can assume that the entire conductor participates in the signal current and hence Rsig is the same as the ‘alfa’ C resistance of the signal trace, which is:

For example, for a 5-mil wide trace:

For our purpose, we are interested in AC resistance at frequency f. Here, the skin effect comes into the picture. As per skin effect, the current at a frequency f travels only up to a certain depth called the skin depth of the conductor which is:

The following table gives the value of the skin depth at various frequencies:

We see from above that at 4MHz, the skin depth equals the 1oz copper thickness and at 15MHz, it equals ½oz copper thickness. Beyond 15MHz, the signal current travels only in-depth less than 0.7mils and it keeps decreasing as the frequency increases.

As we are concerned here with high-frequency behavior, we can safely assume that T is greater than the skin depth at frequencies of our interest, hence instead of using T in the formula for signal resistance, we will use the skin depth. So we now have:

We use 2δ instead of δ since the current uses all the periphery of the conductor – technically 2W can be replaced by 2(W+T).

The return signal travels in only one thickness δ along the surface nearest to the signal trace and its resistance can be approximated by:

For a typical copper-clad laminate, the interface will look like as given below:

hz is a measure of surface roughness.

Typically, hz varies from one foil type to another and the typical values are:

If the roughness hz is smaller than the skin depth (which will be the case at very high frequencies), this will cause additional conductor losses. We experimentally observed this increase by making test circuit boards with different foils having different hz.

We found that losses in the case of VLF foil are lower than in the case of the usual HTE foil. For RF/microwave boards at frequencies greater than 1GHz, these conductor losses due to roughness can become significant over long signal lines.

At low frequencies, it will still be:

Use the higher of the equations above for R.

If f were in GHz and W and T in mils, we would get:

The important point to note is that at frequencies greater than 50MHz, conductor loss is proportional to the square root of the frequency:

It is not easy to predict the additional loss due to copper roughness – simple formulae do not exist.

As was mentioned earlier, this is the dielectric loss in units of dB per unit length in a transmission line:

Z0 = Impedance of the transmission line is about ≈√L/C

The board material manufacturers publish the values of Er and Df. We will now find the relation between G and Er, Df.

Loss tangent/dissipation factor of a dielectric

We can model a dielectric layer between two conductors as a conductance G in parallel with a capacitance C:

The AC voltage and current of frequency across this conductor is:

If σ is the effective conductivity of the dielectric material, then:

It has been experimentally observed that tanδ or Df varies very little with frequency and may be considered as a value independent of the frequency for all practical purposes:

The above equation indicates that conductivity σ and thus the conductance G of the dielectric increases with the frequency. This is something you can expect as the greater the frequency, the greater the dissipation of the heat in mechanical motion of dielectric dipoles in their effort to align with the alternating electric field across the dielectric. (We call it ‘damping of the vibrating dipole moments’.) 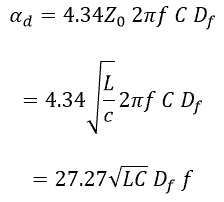 Recall that √LC gives the propagation delay per unit length – Pd – of the transmission line.

We see from above that the dielectric loss is proportional to the frequency.

To get some idea of its magnitude, let’s consider the PCB materials Isola 370HR and I-Speed and I-Meta:

We measure the value of the loss. (It is not easy to measure the conductor and dielectric losses separately.)

If we measure the insertion loss for sinusoidal signals at varying frequencies – say from 1 GHz to 10 GHz – we can use the above equation to separate the two types of losses:

At high-speed or high-frequency, we can’t ignore the transmission line effects. The losses in the PCB trace are dependent on the frequency, the dielectric constant (Dk), and the loss factor (Df). The losses will be higher at high frequencies, higher Dk value, and higher Df value. The roughness of the copper surface also increases the losses.