Physicists explore the fundamental constituents of matter by accelerating subatomic particles to speeds approaching that of light and colliding them head-on or against stationary targets. The reaction products are then observed in various types of detectors. Recent experimental results from the CERN accelerator facility in Switzerland revealing the long-sought Higgs boson have been widely publicized. Researchers there, and at accelerators elsewhere, investigate the particles produced in such collisions. 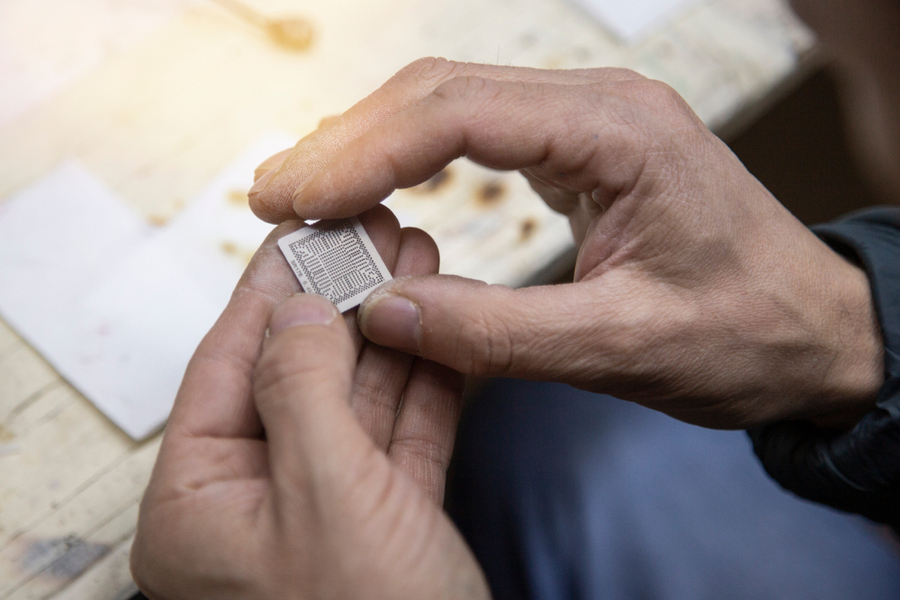 A novel high-yield package cut costs by 32% vs. COB.

The particles produced in these collisions are often bent by powerful electromagnets surrounding the detectors in order to determine the particle charge and momenta. The detectors incorporate tracking devices that capture faint electrical signals the particles produce during their transit. Various types of tracking devices are employed among the experiments at the different facilities, but many of them have in common a readout chip, the APV25, whose basic design was jointly developed for trackers at CERN nearly 20 years ago by a British university and a national laboratory.

The first prototype module was a composite of two boards laminated together, which distributed the chips’ inputs via bond wires to edge connectors. It was very expensive to fabricate and assemble and permitted no rework once a chip was bonded to the board.

The APV25 has 128 analog inputs that each connect directly to a tracker channel. The input signals are amplified and shaped, then sampled, and the results are fed into a pipeline of programmable length. The conditioned signals are read out after receiving a trigger request, further amplified, and multiplexed such that the signals from all 128 channels can be read out on a single line that has a differential current output.

The Compact Muon Solenoid is one of four detectors at CERN and one of two that identified the Higgs boson. Its tracker system has approximately 10,000,000 channels, which are read by the 128-channel APV25 chips (about 75,000 of them). The CMS tracker contains many concentric layers of sensors surrounding the interaction point. The APV25 sensors are wire-bonded directly to PCBs and encapsulated, not packaged because the mass of a package could compromise particle detection in succeeding outer layers.

The wire-bonded, chip-on-board construction, though unavoidable in the CMS detector at CERN, is inconvenient. Board rework is impractical to replace a failed device; instead, the entire readout board would be replaced, even though the other devices on board are good. However, in some trackers at other facilities, detection would not be hampered if the APV25 readout chips were packaged. Such is the case at the Brookhaven National Laboratory Relativistic Heavy Ion Collider (RHIC) in Long Island, NY, for example.

Bates Research and Engineering Center at Massachusetts Institute of Technology was engaged by the Brookhaven laboratory to design readout electronics for an upgrade to the detector system of the STAR experiment at the RHIC (sidebar). Bates is part of MIT’s Lab for Nuclear Science. It is an engineering facility that designs and constructs instruments for physics experiments in support of work by MIT faculty and other researchers. The initial prototype readout module for the STAR tracker ganged five APV25 chips wire-bonded directly to a printed circuit board. The first prototype module was a composite of two boards laminated together, which distributed the chips’ inputs via bond wires to edge connectors. It was very expensive to fabricate and assemble, and permitted no rework once a chip was bonded to the board.

To reduce the cost of the module, enable the readout chips to be tested immediately before installation, permit rework, and simplify the application of the APV25 to other projects, Bates developed a BGA package for the die and redesigned the readout module. For tracker architectures in which the BGA mass would not interfere with particle detection, the approach greatly simplifies the design, assembly, and maintenance of readout cards.

The BGA package that Bates developed for the APV25 has 315 SnPb solder balls on a 0.8-mm pitch and measures 15 x 20mm. Of the 315 balls, 39 provide only mechanical support and have no electrical function. The package substrate is a four-layer design with 50µm trace width and spacing, using Nelco 4000-29 material (Figure 1). All the slow controls, the clock, the trigger, and the chip analog outputs were routed to one edge of the BGA; the 128 tracker inputs are on the opposite long edge of the package, no more than four balls deep from the edge, with some wrap around. The layout enables routing to all the input channels using only two signal layers on host readout boards. A grid of 9 x 9 balls directly under the die corresponds with a grid of vias connected to the die attach pad for excellent thermal conduction and electrical contact to the negative power plane in the tracker module (Figure 2). Sierra Circuits fabricated the BGA substrates, as well as the boards for the tracker modules, which each monitor 640 channels (Figure 3).

The packages were assembled with known-good die, which were bonded with 25µm gold wire and encapsulated. A test board with a custom BGA test socket was used to evaluate the basic functionality of the assembled APV25 devices. A 94% yield was achieved.

Learn How To Breakout a .5mm BGA

The Physics of RHIC

The Relativistic Heavy Ion Collider primarily collides ions of gold, one of the heaviest common elements, because the gold nucleus is densely packed with particles. The ions are atoms of gold that have been stripped of their outer cloud of electrons.

Two beams of gold ions are collided head-on when they have reached nearly the speed of light (what physicists refer to as relativistic speeds). The beams travel in opposite directions around the facility’s 2.4- mile, two-lane accelerator and at six intersections the lanes cross, leading to an intersection.

If conditions are right, the collision “melts” the protons and neutrons and, for a brief instant, liberates their constituent quarks and gluons. Just after the collision, thousands more particles form as the area cools. Each of those particles provides a clue about what occurred inside the collision zone.

Physicists had postulated that all protons and neutrons are made up of three quarks, along with the gluons that bind them together. Theory holds that for a brief time at the beginning of the universe there were no protons and neutrons, only free quarks and gluons. However, as the universe expanded and cooled, the quarks and gluons bound together and remained inseparable. The RHIC is the first instrument that can, in essence, take us back in time to see how matter behaved at the start of the universe.

Brookhaven National Laboratory announced in 2010 that the RHIC had produced the highest temperature ever recorded (4 trillion degrees Celsius, roughly 250,000 times hotter than the core of the Sun), thus recreating an exotic form of matter that had not existed since microseconds after the Big Bang. Researchers for the first time were able to positively confirm the creation of the quark-gluon plasma. For less than a billionth of a trillionth of a second, quarks and gluons flowed freely in a frictionless fluid that hadn’t existed for 13.7 billion years.

Benjamin Buck is an electronics engineer at MIT Bates Research and Engineering Center and designer of the BGA package and associated electronics for the STAR experiment at the Relativistic Heavy Ion Collider at Brookhaven National Laboratory; bbuck@mit.edu.

Case Study: Design of a Motor Control Board

Case Study: Design of a Rigid-Flex Video Board

Case Study: Design of a High-Speed Video Board