Multilayer PCB fabrication is a consistently evolving, progressively complex interplay of processes, design rules, and product specifications. In this article, we will discuss the role of copper wrap plating in increasing the reliability of via structures. 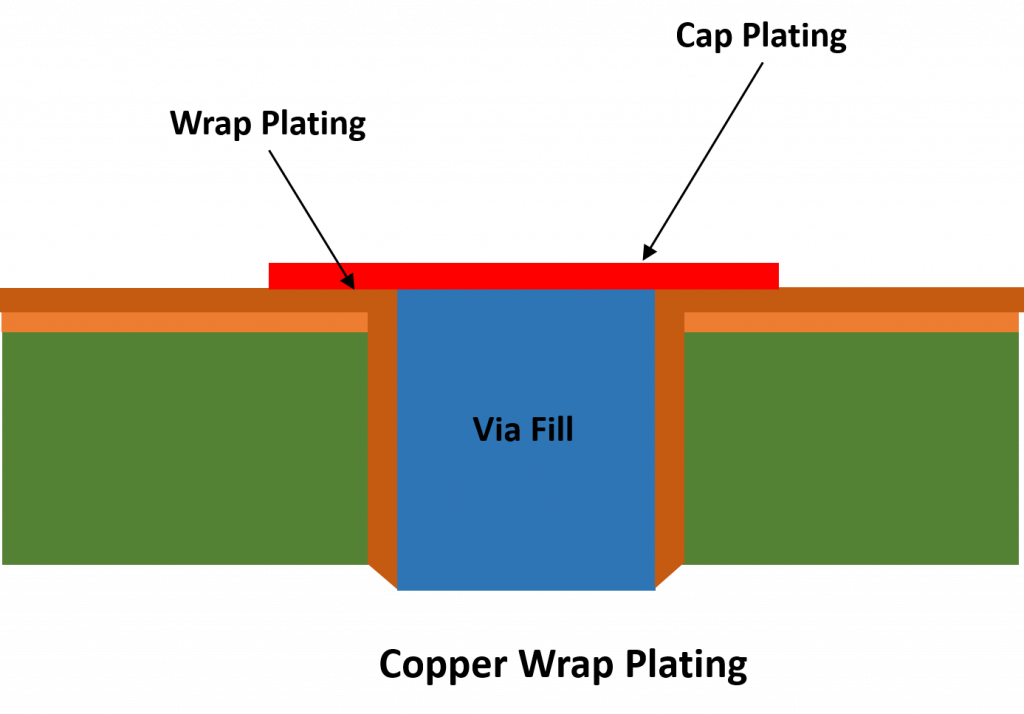 Multilayer PCB fabrication is a consistently evolving, progressively complex interplay of processes, design rules, and product specifications. In this article, we will discuss the role of copper wrap plating in increasing the reliability of via structures.

What is copper wrap plating?

The electrolytic hole plating deposition continuously extending onto the surface from a plated via structure is known as the copper wrap. (From IPC-T-50 standards)

Simply put, wrap plating is copper plating from the via hole that wraps around the surface foil.

The IPC 6021B standard has included a copper wrap plating requirement for via-in-pad structures. The filled copper plating should continue around the edge of the via hole and extend onto the annular ring surrounding the via pad. The requirement enhances the reliability of the via plating and can potentially minimize failure due to cracks or separation between the surface features and the plated via-hole.

Filled copper wrap structures are of two types. In one method, a continuous copper film can be applied to the interior of a via which can then wrap over the top and bottom layers at the via ends. This plating will then form the via pad and trace which leads to the via, generating a continuous copper structure.

In another approach the via can have a separate pad formed around the via ends. This separate pad layer is meant to connect to ground planes or traces. The next step would be the copper wrap plating which fills the via and wraps over the top of the external pad, creating a butt joint between the via pad and the copper fill plating. Even though there is a certain extent of bonding between the via pad and the fill plating, the two plating structures do not fuse completely together and form a single continuous structure.

What are plated through holes in PCB?

Also read, what is conformal coating?

What is via in pad?

Effect of thermal cycles on copper wrap plating in PCBs

Repeated thermal cycles lead to stress on the plating, via fill materials and laminate interfaces due to the different CTEs of the material in the interface. This is called an expansion mismatch, and the magnitude of mismatch is a function of the number of layers, CTE of materials, and temperature.

When a PCB is subjected to thermal cycles, volumetric expansion generates compressive or tensile stress on the copper wrap plating, via fill material, and laminate interfaces.

Stress on the copper wrap plating can cause the plating in the via barrel to crack and get disjointed from the butt joint. It is also possible for continuous copper wrap plating to crack at the end of the via. If the interior of the via detaches from the butt joint, or if the via cracks at the edge of the plating, an open circuit failure will occur in the via. Upon repeated thermal cycling, the board is bound to flex, leading to more failures. Vias that end closer to the outermost layer in the board are likelier to fracture under thermal cycling since the board will flex to a greater extent in these layers.

Even though copper wrap plating structures have the potential for failure, they are still preferred over vias that don’t use this type of plating. The plating provides increased structural integrity to the plating in the via. It also increases the contact area between the via plating and the annular ring.

You can increase the structural integrity of the via wall further by using button plating over the existing copper wrap plating. Such button plating will also wrap over the top and bottom edges of the via, just as in wrap plating. After this step, the plating resist will be stripped, and the via will be filled with epoxy. The next step would be to planarize the surface, leaving behind a smooth surface. These steps are the best way to enhance reliability while still meeting IPC 6021B standards. Such plating can also be implemented for buried vias if the buried vias are applied in separate layer stacks.

IPC-6012B standard states that copper wrap plating shall be continuous from the filled plated hole onto the external surface of the plated structure and extend by a minimum of 25 microns (984 micro-inches) where an annular ring is required. Also, any reduction of wrap plating by processing such as sanding, etching, and planarization, etc. resulting in insufficient plating is not allowed. IPC-6012B Table 3-2 gives the requirements for copper wrap thickness. The continuous minimum wrap requirement for class 3 designs is 0.472 mils for a via, 0.236 mils microvia, and 0.276 mils for a buried via.

Copper wrap plating is essential to increase the performance of a PCB, and the applications are as follows:

PCB designers should be familiar with copper wrap plating as a way to increase the reliability of via structures. This will help in optimizing the PCB manufacturing process and increasing production yields while ensuring manufactured PCBs have enhanced product life.